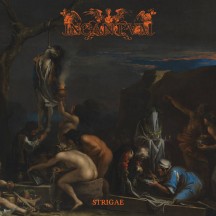 
On 18th November, I, Voidhanger Records, purveyors of all things esoteric and unconventional, dropped a trio of records, all of which were the debut offerings of the respective bands. Unsurprisingly, all 3 albums are maddening, chaotic exhibitions of avant-garde extremity, but you can trust the one masterminded by a clarinetist to be the most intriguing.

That is not to downplay the efforts of SkyThala or Arkæon; neither of their styles are quite my thing, but both have uncompromising and relatively unique visions. I was nevertheless more drawn towards Strigae, the first offering of note from Incantvm. The aforementioned clarinetist (and general multi-instrumentalist) driving this project is Vittorio Sabelli, who has already dropped a debut album this year with Notturno and has further experience in the world of black metal with Dawn Of A Dark Age, so he is no stranger to extreme metal. Nor are his bandmates in Incantvm, who collectively have extensive experience in other Italian extreme metal bands such as Dreariness, Mortuary Drape and Lord Vampyr, and that’s without even mentioning the choirmaster on Strigae, Rotting Christ’s Sakis Tolis. This is a debut, but it’s not made by novices, and that experience allows Sabelli’s distinct vision to come to fruition.

As to what that vision is, perhaps the simplest genre classification of it would be blackened doom, albeit not the most orthodox interpretation of that subgenre. There’s also, in addition to the clarinet, several other orchestral instruments featured here, including the violin, double bass, saxophone, trumpet, and orchestral percussion, not to mention the choirs, so one could also consider it to be a symphonic album, although it’s an interpretation of symphonic metal that deviates substantially from most typical versions of the style.

Following an introductory rendition of Mozart’s “Dies Irae”, the first full-length track, “Il Cerchio E Il Fuoco”, explodes in a triumphant occultish form of doomy black metal, within which harrowing shrieks and blasting sit alongside delicate acoustic guitar melodies. After this frantic opening, the metal dissipates and the orchestral instruments again take centre stage. It is not the nature of this record to forever segregate and flip-flop between the two instrumental groups, as eventually listeners are treated to clarinet melodies climbing above grim doom chords; however, the two extremes are still a bit more separated from one another across the rest of the album than I would perhaps have liked.

In spite of its 15-minute length, “Il Cerchio E Il Fuoco” is effectively built around 2 metal motifs, the more up-tempo of which reminds me of fellow occult black metallers Tableau Mort. “Lamie” beats it by effectively having one main metal passage that is repeated twice, with an extended chamber music interlude in between; it is a passage good enough to listen to twice though, the moody mid-tempo black metal riff carrying plenty of gravitas. “Il Processo”, despite being shorter than both tracks that precede it, both incorporates the orchestral instruments more into the metallic portions of the tracks and features greater variety between those portions, but there’s still plenty of time for ominous organs, spoken word, and clarinet quartets.

Strigae is a really interesting listen, and there’s quite a lot here to like. If I were to have one real complaint about it, it would be that the concept feels slightly underdeveloped. The building blocks are there to create something imposing, but I would prefer to have more integration of the orchestral instruments and the metal, even if I do enjoy each in isolation. Additionally, I would also like a bit more progression within songs, as the way both “Il Cerchio E Il Fuoco” and “Lamie” revert back on themselves, while no issue in isolation, does make Strigae feel a bit static when it’s done for 2 of the only 3 full-blown compositions on the record.

This is still only a debut album though; if the Incantvm project is one that is going to continue creating music going forward, there will be ample opportunity to mature and develop from this promising beginning and deliver something truly fascinating. For now, Strigae is a worthy addition to the I, Voidhanger annals, and one to check out for those that enjoy a more novel spin on their metal.

Written on 01.12.2022 by
musclassia
Hey chief let's talk why not
More reviews by musclassia ››