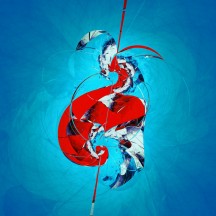 
Different Kinds Of Losses is the debut full-length album from Rioghan, the solo project-turned-band masterminded by Rioghan Darcy. Rioghan Darcy is the performing name of Jenni Perämäki; quite how a Finnish singer came to adopt such an Irish name isn’t entirely clear, but there’s further enigmas to be still be uncovered on this record.

Starting out as a poet, Darcy took steps to put music to lyrics in 2019; Rioghan started out as a solo project, but multi-instrumentalist Teemu Liekkala and drummer Valtteri Revonkorpi have subsequently hopped on board. The trio aren’t the only musicians that appear on Different Kinds Of Losses, which follows swiftly on the heels of Rioghan’s first EP Blackened Sky, which dropped in 2021; this record features Marko Hautamäki as a guest on cello, along with Tony Kaikkonen cameoing with harmonica and backing vocals.

More eye-drawing, however, are the other two guests; Rioghan has mentioned Leprous and Katatonia as being among her influences, and the respective vocalists Einar Solberg and Jonas Renkse feature on Different Kinds Of Losses. It’s impressive that Rioghan has managed to acquire the talents of these two big names given the project’s relatively modest following on social media platforms; more surprising is that neither individual is actually singing on the album, both instead contributing keyboards. There’s quite a bit to unpack about this release, and I haven’t even got onto the music yet.

I’ve seen the record tagged as alternative, gothic and progressive metal; of the trio, I’m most inclined to go with alternative metal as the leading trait, closely followed by prog. I hear less gothic metal here, although opening track “Sight”, on which Renkse appears, does have shades of Katatonia and recent Draconian in moments. Of the two guests on Different Kinds Of Losses, it is Solberg’s main band whose influence is more keenly felt; there are multiple songs throughout the album that have a debt of inspiration to Leprous, particularly their material from Malina onwards. “Promises” features exchanges between contorted complex Leprous-style riffs and more straightforward alt-metal choruses (with some decent screams thrown in along the way), while “Home” has a “From The Flame” bounce to it. The electronic-heavy “Bruises” (on which Solberg can be heard) mixes a Piftalls-style core with an Aphelion-worthy climax, the melancholic “Innocence” replicates the evocative nature of Leprous’s “The Shadow Side”, and “Reflection”, probably the record’s heaviest song, takes the signature Leprous polyrhythms in a djentier direction.

The mercurial Norwegians are clearly the biggest musical influence on Different Kinds Of Losses; however, none of the above songs sound like straight replicas of songs from Leprous. Each brings something else to the table, whether it’s the alt choruses of “Promises” and “Home”, the slight Nightwish energy in hints of “Innocence”, or the heaviness of “Reflection”. Beyond these tracks, though, there is a good amount of diversity in the music on this album; the floating “Breath” has a peculiarity to the vocal arrangements that channels some art pop projects, “Time” is a straightforward acoustic singer-songwriter cut, and closing duo “Lights” and “Summer” seek to find balance between electronic and metallic sounds. The variety on this album is impressive; so is the execution, as both the Leprous-inspired material and the more varied musical departures are pulled off very adeptly.

However Renkse and Solberg came to appear on Different Kinds Of Losses, they’ve ended up being part of a very decent debut record. Rioghan wears some of her influences quite openly, but even despite this there is a fairly distinctive artistic voice coming through already in the early stages of her musical career, and those influences have been integrated into some very well-crafted compositions.

Written on 15.12.2022 by
musclassia
Hey chief let's talk why not
More reviews by musclassia ››