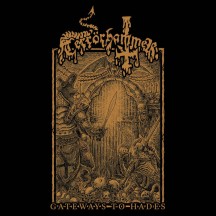 
Don’t let the 90s Swedeath cover art fool you, this is a band with a metal umlaut in their name. Don’t let the blackened vocals fool you, this is speed metal with an extreme bend to it. Actually, Terrörhammer are not out to fool anybody; they are very upfront with what they are about. What they are about: classic speed metal taking cues from thrash as well as heavy metal, with a blackened twist as icing on the Hadal cake. Doing their part in promoting the vastly underrepresented Serbian metal scene (just like me, having reviewed related project Smrt some time ago), Terrörhammer hail from Pančevo near Belgrade (a town that I’ve coincidentally passed by quite a number of times on my way to and from Novi Sad). Their previous vocalist is curiously now in Gorgoroth, the album features a guest solo by Tamás Buday of Tormentor, and the album is released on Osmose, so they have quite a few connections to the metal world at large. Well, that is who they are, so what do they play?

They play fast, loud, and relentlessly, over the course of an adequately short runtime of just over 30 minutes. After a short synth intro that seems slightly out of place considering what follows, Gateways To Hades jumps straight to Autobahn speed with “At Dawn We Attack” - with a title like this, what else would you expect? The first thing that strikes me is the crisp sound; the music sounds like a modern take on 80s speed metal productions, not quite hi-fi but just clean enough to make room for everything that follows at breakneck speeds. The drums are punchy (especially the toms have a nice reverberating thud to them), the guitars have just enough presence for the bass to stay on equal footing, and the vocals are… perhaps a bit too loud, but not to the point it gets annoying. Like the album that follows, “At Dawn We Attack” has a tempo of about 13.7 billion bpm and features some well-performed gang vocals in the chorus.

If you think this all sounds like I could be talking about a Sodom or Venom song, you would be correct, because it does. What to expect from here on? More of the same, of course: constantly breakneck speed riffs, Motörhead drumming, rhythmic blackened screams, gang vocals - this is music designed for a live setting. After the title track’s melodic main riff and catchy chorus that bring Sabbat to mind, a cheeky wolf’s howl catches my attention in “Transylvanian Whore”, where I am left expectant that Rob Halford (do I need to spell the band out for you? Thought not) will enter at any minute. However, by sixth track “The Interceptor” it has become very clear to me that Terrörhammer are not the least bit interested in changing up their formula. This makes the songs blend together quite a lot in my ears, as the vocals (apart from a few features here and there) turn monotone in the long run, and most of the riffs sound pretty similar to each other. “Midnight Patrol” switches it up a bit with a more hard rocking riff, but the song works mostly because it introduces some variety, and ends up being the least energetic cut on the album.

My favourite song is the final track, “Tronized Goat Master”, on which Terrörhammer make a sudden sharp turn into black metal territory, the main motif being a melodic four-chord riff in a second-wave style and the drums playing more towards proper blast beats than on the rest of the album. Twice in the song, it devolves into a glorious breakdown that puts a smile on my face and makes my head bang without difficulty. I repeat: this would be damn fun live, and if they happen to be playing while I visit Serbia next, I would gladly attend. The song ends with something that sounds like a weirdly romantic bestiality incident and I will leave it at that.

All in all, I am having a great time listening to Gateways To Hades; it is balls-to-the-wall, unapologetic, and easy to like. The short runtime works in the album’s favour, as over 40 minutes of the same might get a bit excessive. The expertly performed riffs steal the show, even though they get a bit repetitive at times, and the only thing more entertaining than the music itself is the metal umlaut - yeah, here in Sweden, ‘ö’ is an actual letter that sounds like the vowel in ‘earn’ or ‘burn’, making any band name with such a feature look pretty funny. But that is all good, because Terrörhammer is good, clean fun.