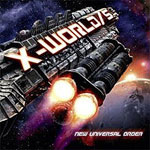 
A lot of people, me the first, are always complaining that we don't have a lot of original bands. With X-World/5 I think that we will have to shut up this time because definitely their music is not so common and I doubt that we will be able to listen to such kind of Metal a lot of other times this year. I'm not saying that "New Universal Order" is a perfect album but at least there are a lot of good ideas and maybe that you should try to have a look on it.

X-World/5 is composed of famous musicians. Andy Larocque of course but also Magnus Rosén (ex: Jorn) and Nils K.Rue (Pagan's Mind) plus two other members Big Swede and Reeves Gabrels. This is a really original line-up and their music is original too. To tell you how it can be, I must talk about three Metal genres: Power, Progressive and finally Indus. As you can understand, "New Universal Order" is weird on a side, this mix of Power Metal with Progressive influences and a lot of "cyber" sounds with Industrial tempos and melodies are surprising. We've already seen some mix of Thrash and Death with Indus but Prog and Heavy, that's new for me. In the end the album finally sounds really modern and futurist, it's a bit like if it was Heavy Metal of the 31th century, that's special and some people will say that it's an heresy to do that but at least this is different and totally crazy.

On the other hand such kind of music can be a bit tricky and I think that X-World/5 will encounter some problems with some metalheads. First this is maybe a bit too elitist on a side but above all this is also a bit messy. Believe me or not but it's really weird to listen to a big Industrial heavy Metal riffs which can turn into Progressive Metal a la Beyond Twilight to finish into classic Power/Heavy Metal. It's for sure really original and fresh but maybe a bit too complex to be enjoyed by the metalheads who are not into those specific genres. Let's say that it's a good first try not perfect but with good complex songs and a lot of good original ideas.

"New Universal Order" can be considerate as a real avant-gardist album. I have to say that I like the musicians of this project, I like the way how they play their really original Metal. "New Universal Order" is a bit special though and not perfect but it's really promising for the future releases of the band. Let's hope that the guys will release other albums in the future, I'm already curious to hear how it will sound.