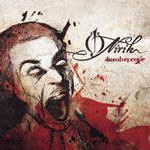 
Newcomer of the French Metal scene, Ö-Nirik should become a big name in the country if they follow the steps that they're starting to take with the release of their first album "Incoherence". Between Aborted for its violence, Scarve for its technique and even Soilwork for the melodic parts, Ö-Nirik plays a really good Metal, brutal but also melodic. For a first album, this is a good beginning definitely!

The good thing in the music of Ö-Nirik is that it's really varied. When you'll listen to the album you'll be able to listen to brutal Death Metal which can become melodic Death and finally have some really complex parts a la Scarve. This is really interesting because it's all but linear and the fact that the songs are varied clearly minimizes the boredom effect. I mean, of course a great album of Brutal Death can be good from the beginning to its end but when it's really repetitive and monotonous, it can become boring after five minutes and here the variations and change of musical orientations inside the songs give a really refreshing aspect to the music of Ö-Nirik. A song like "To Die Standing" with its really melodic lead guitar and violent drum blasts and vocals will probably remind you Carcass during its "Heartwork" period and even if the purist will say that it's not real Grind, I will just say that I don't give a shit… The melodies are great and don't worry anyway even if some passages can sound a bit like some Gothenburg Death Metal, this is not a new band in this category, Ö-Nirik being a lot more violent and complex.

For a first album I must say that it's really impressive. The guys are all great musicians and the guitarists are able to play amazing soli. Ö-Nirik has its own personal sound and the originality of its music will probably attract a lot of new fans. The album is well produced and the sound is perfect. One more time I will not avoid the comparison with Carcass but I like this mix of violence and melody, my only problem here being just some few clean vocals during the choruses (on "Dreamkeeper" for example) which kill a bit the general naughty ambiance of the album. But all in all the positive points win this match by KO and when you know that it's only a first album we can already expect a lot of great things for the future of the band!

Finally we have in France a band which plays melodic Death Metal but which not only a sad copy of the Swedish melodic Death Metal bands. "Incoherence" is a great first album and I hope that you'll be able to buy it to support a band which deserves all our support to continue its career. When you know that the second album is already in preparation, I think that the best is coming. "Incoherence" is one of my great surprises from France this year, don't let me alone here and buy this album, you'll not regret it!