Poland's leading progressive rock/metal ensemble Riverside are soon to release their new studio album, ID.Entity, on January 20th, 2023. Therefore, today, the band are pleased to reveal a next new single and video for the album's opening track "Friend Or Foe?" in its 'Single Edit' with a video clip animated and directed by Thomas Hicks.

Riverside are pleased to present a second single for their upcoming studio album ID.Entity, to be released via Inside Out Music on January 20th, 2023. Check out the album's closing track, "Self-Aware", in its 'Single Edit' version with accompanying video clip directed by Marcin Zawadziński and Mariusz Duda. 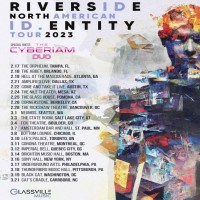 Next February & March, the Polish masters of prorgessive metal Riverside are returning to the North American lands for a string of headlining shows. The 23-date long trek, which will begin on February 17th (2023) in Tampa (FL), will feature support from Chicago-based prog rock/metal group The Cyberiam Duo.

True to their word from when they began tracking it, the next Riverside album will arrive in January 2023. It is titled ID.Entity and it will be released on the 23rd of January (preorders here). You can listen to "I'm Done With You", the first single off of it, below.

Polish masters of progressive metal, Riverside, have entered the studios (The Boogie Town Studio in Otwock, and Studio Serakos in Warsaw), where they will record the new music for their next long player. The successor to 2018's Wasteland is scheduled for January 2023 release.


Riverside - To Tour Latin America In May 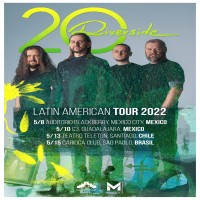 After recent North American tour announcement, Poland's Riverside now announce a short run of the Latin American one to continue their 20th anniversary celebration. Following North American part of touring in April, this one starts on May 8th in Mexico City.

As part of their 'Riverside 20' celebrations, Polish prog metal masters Riverside will be returning to the North American lands and waters next spring. 22 dates are scheduled in April, including a performance at the 'Cruise To The Edge' event in early May.

Polish prog masters Riverside are celebrating their 20th anniversary in 2021 and have decided to record a very special new song, entitled "Story Of My Dream". It's released worldwide as a digital single, featuring artwork by Travis Smith and can also be streamed in the form of an official video clip (directed by Tomasz Pulsakowski). "Story of My Dream" serves as opening track of the first of two special digital "best of" compilations to be released on November 19th, 2021. Featuring remastered material and some deep cuts, Riverside 20 - Vol.1, The Shorts will include 19 tracks and Riverside 20 - Vol.2, The Longs will include 14 songs as seen below.

Polish progressive rock/metal masters Riverside announce Lost'n'Found - Live In Tilburg, a very special live-release coming out on December 11th, 2020 via Inside Out Music. This output features 13 songs, recorded on October 18th, 2015 at 013 in Tilburg (The Netherlands) with a playing time of 104 minutes. A first sample of the release has been made available with the live video of "Hyperactive", directed and edited by John Vis.


Riverside - Announce They Are A Quartet Again

Polish progressive metallers Riverside have announced that guitarist Maciej Meller is now a full-time member of the band. The guitarist has been performing live with them for the last three years, following the death of Piotr Grudziński in 2016.

Polish prog masters Riverside are pleased to announce a first batch of tour dates for the next year. The band confirmed a 14-date run, mainly focused on the Southern European region. Riverside will continue promoting their latest full-length, Wasteland, hence the title of the tour 'Wasteland - With The Sun Tour 2020'.


Riverside - To Release Special Edition 2CD + DVD Of The 'Wasteland'

Riverside are pleased to announce a special edition 2CD+DVD version of the Wasteland album, scheduled for release on November 29th, 2019 via Inside Out Music. The Wasteland - Hi-Res Stereo And Surround Mix 2CD + DVD will be released as Digipak format with Slipcase and includes a DVD bonus disc of Wasteland as Hi-Res Stereo 24bit version and as Surround Mix (4.1), plus 3 video clips.

"Lament", the new single off the upcoming, seventh studio album Wasteland (due out on Inside Out Music next week, on September 28th, 2018) by Polish prog masters Riverside is being launched today. Check out "Lament" in a stunning video clip created by Tomasz Pulsakowski/Sightsphere now here.

"River Down Below", the new and second single off the upcoming, seventh studio album Wasteland (out on InsideOutMusic on September 28th, 2018) by Polish prog masters Riverside has been launched. As of now, you can discover the tune "River Down Below" in its full album version via the label's YouTube channel here. Don't miss it!

As promised, proggers Riverside have revealed today the first single off their impending new opus, Wasteland, their first in three years. The Polish group shared the new single "Vale of Tears" which you can hear on the video available below. It's the beginning of a new chapter for the band without guitarist Piotr Grudzinski.