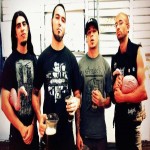 Miami-based Grindcore act Maruta have finished work on their new album - the band's second for Willowtip Records - entitled Forward Into Regression. A release set has been set for February 22, 2011. Germany's Power It Up Records will be releasing a gatefold LP version. A release date for the vinyl is TBD.

Vocalist Mitchell Luna comments: "So we finished wrapping up full-length number two, and I can honestly say that we are all very proud of the outcome. We took the same open minded approach to grindcore as we have on our previous recordings, but incorporated a couple new surprises. The end result sounds more relentless, and I personally feel that it is a well rounded record that is equally emotional as it is abrasive. Stoked for it to drop!"

The album was recorded at Florida's Mana Recording Studios (Hate Eternal, Cannibal Corpse, Nile) by engineer Brian Elliot. This will be Maruta's first release with their new line-up. Drummer Daniel Morris and bassist Mauro Cordoba joined the band in early 2010.

Two preview tracks, called "Hand Of The Overseer" and "March Forward (Into Regression)" have been added to the Willowtip Music Player.