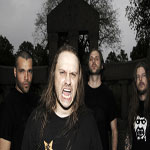 Entombed has apparently split into two separate bands. Back To The Front, the new album that was recorded last year by four members of the most recent lineup of the legendary Swedish metal act, LG Petrov, Nico Elgstrand, Olle Dahlstedt and Victor Brand, and recorded with Roberto Laghi, will come out under the name Entombed A.D.. Furthermore, it was announced that frontman LG Petrov will only perform with Entombed A.D. and not take part of any upcoming shows announced under the name Entombed. Back To The Front is now being scheduled for a spring release after several delays.

Alex Hellid did not participate in the writing and recording of Back To The Front.