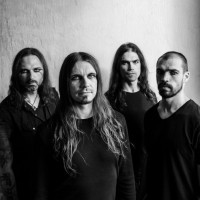 Tomorrow is the official release of Thulcandra's fourth studio album, A Dying Wish. Before the latter lands in stores, the band present a visualizer for the last streaming single called "Scarred Grandeur".

Steffen Kummerer on "Scarred Grandeur": "Scarred Grandeur" shows a rather pure and unpolished side of the band. You hear a real band performing relentless from front to end without any compromises. Filthy guitars, scruffy bass and nasty drums - listen to our new single and catch Thulcandra at a show near you!"