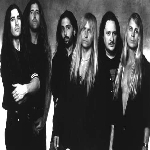 Savatage guitarist Chris Caffery recently gave 'That Metal Interview' an update on the band's long-awaited follow-up to 2001's Poets And Madmen, which they have been working on over the past year even though the band has been mostly inactive for years, save for just one performance at Wacken Open Air back in 2015. Caffery not only confirmed that he and frontman Jon Oliva have been working on new songs together, but revealed that plans are also afoot for Savatage to release some vintage concert footage "in DVD form."


Caffery commented: "We've been writing and talking about it now. It's the first time in a long time where I actually have been trading riffs and songs with Jon [Oliva, Savatage frontman] over the phone, and I have some really cool things. I have this one song that I wrote that he really likes and it's kind of one that I think would be a good lead-off track for Savatage. [We're] just calling it 'The Dungeous Are Calling Again' and it's a really, really, really cool metal song. We'll see what happens. I know a lot of people would like to see a new Savatage record. I think the cards are lining up. Whether or not it's gonna fall into place, we'll find out. I always tend to stay really positive and optimistic about it - I have for 20 years. So hopefully it does wind up happening. We're not getting any younger."

Chris also revealed that a Savatage DVD featuring vintage concert footage is in the works: "There might be a couple of things people will be really happy to see pop up. 'Cause there was some stuff that we had, recorded some full concerts from The Wake Of Magellan tour, and then there's some other footage that we might wanna try to [put out]. Unfortunately, there wasn't anything, really, that we could use from the Criss [Oliva] era as far as full concerts, which is very, very unfortunate. But we have some stuff from some of the other ones."