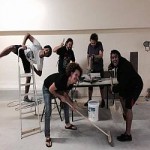 Four years after the release of their last record Phronesis, djent/math formation Monuments now proudly announce and detail the next one in line. Entitled In Stasis, it has been set for April 15th, 2022 official worldwide release (pre-orders begin February 4th). The upcoming outing was produced, recorded and edited by John Browne, Andy Cizek and Mike Malyan. Mixed by George Lever and mastered by Jens Bogren.

Monuments on their new product: "We approached this album without the intention of a specific concept. However - three songs in, what was being written ended up sharing a common theme. This feeling of being stuck in the middle, something we experience throughout our lives - within friendships and relationships, love to hate, life to death, belief or non-belief, being in power to total defeat, isolation to freedom. Over the past 2 years, we have been faced with many of these trials, and these struggles can be heard throughout the record. This album is a culmination of our greatest triumphs and our deepest struggles. We hope it resonates with you, and brings you closer to equilibrium.