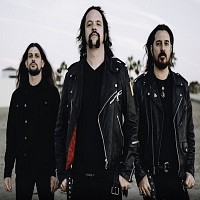 American trio Night Demon have shared their rendition of the "100MPH" song, originally performed by Cirith Ungol (released on 1986 album One Foot in Hell. Cirith Ungol vocalist does the guest vocals on this single. This cover track will be part of the band's upcoming special album, Year Of The Demon, due on March 25th, 2022 via Nuclear Blast.