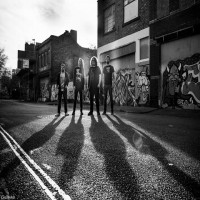 British metal operatives Conjurer are premiering a Matthieu Gill-directed for the "Cracks In The Pyre" single. The song is part of the forthcoming full length instalment Páthos, which drops July 1st via Nuclear Blast Records.

Conjurer comment: "Cracks is probably the biggest departure from our previously established sound - the working title was 'Ballad'. For me this is the most affecting track on Páthos, I connect more with it on every listen, and I think it opens up a new element to the band's identity that will be important moving forwards. The video reflects the themes of the track and was captured on the Scottish coast: the breathtaking landscapes evoke the atmosphere the song is trying to capture, and we're blown away by the finished piece."