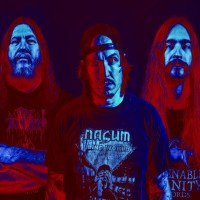 
Comments guitarist Taylor Nordberg: "We are nearing Fearsick's release and we couldn’t be more excited. "Caustic Vomit Reveries" is such a barn-burner of a song; we thought it would be perfect as the last single before the album comes out. This was one of the newer songs we wrote for Fearsick, and we wanted to make sure we got a solid simple, caveman death metal song on the album. Meat, potatoes, and more meat! Bang your head; throw something, and grab the album!"