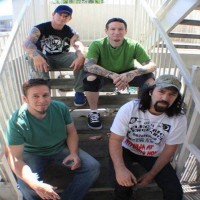 Crossover thrash legends D.R.I. have announced the second U.S. leg of their 40th anniversary tour, which will include mostly cities/states that the band did not play during the initial leg of the tour. The October dates will include support from Deathwish (not to be confused with the British thrash metal band of the same name), while Metalriser will open up for the December dates. D.R.I., whose most recent studio album is 1995's Full Speed Ahead, recently confirmed that a new record is in the works.