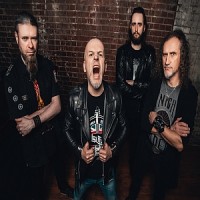 The following message has been posted by Massive Music Management:

"Good news from Vader's camp! We would like to confirm officially the band's lineup for the upcoming tours in October and January. It features Piotr "Peter" Wiwczarek (guitar, vocal), Reyash (bass), Waclaw "Vogg" Kieltyka (guitar) and Pawel Jaroszewicz (drums).

Last Sunday at Progresja Club, Warsaw we had a drummers audition. Earlier, actually just after the anniversary gig we had some talks with a few guitarists about possibilities of joining the band. And now we are ready to announce our new touring lineup. The new drummer is 22- year old Pawel Jaroszewicz from Lublin, who previously played in not so well known act Soul Snatcher, he also did some session drumming for Hell-Born and Crionics.
We must admit the level for this audition was much higher than a few years ago, when we were looking for Doc's successor. We received many submissions from all over the world, however we decided to focus on Polish drummers (due to lack of time, we have to prepare at least one -hour set for the upcoming shows, so we need a very good communication). Finally, we chose 3 drummers and checked their skills in such songs as "Dark Age", "Silent Empire", "Carnal" or "Sothis". Pawel "Paul" Jaroszewicz won the competition and he will appear with the band on the upcoming tours.

Guitar player, the one who will replace Mauser is Waclaw Kieltyka, known more as Vogg from Decapitated! You know this guy and what he achieved with his band very well. Having him in Vader - it's definitely a good thing. Try to imagine Vader live with Vogg on second guitar, it's definitely going to be an unstoppable war-machine! Both Paul and Vogg will play with Vader as session musicians. We still haven't decided who would join Vader as permament members. There are a variety of options available, both on drummer and guitarist vacancy. There's no hurry, we want to prepare everything very carefully. Time shall tell...

October tour will run through Scandinavia. Vader will appear on it together with Grave, Zonaria and Gilla Bruja. It starts on October 17th in Vilnius and runs to January 11th (Aarhus). January tour starts on January 9th and runs to January 22nd, during this trip (named Winterfest 2009) Vader will be sharing the stage with Deicide, Samael, Zonaria, Devian and Artisian.

In the meantime the band is also going to prepare stuff for the next studio album. The pre-production session is scheduled for December at Polish Hertz Studio. The recording session is planned for February/ March, mixes and mastering should take place in April/ May. We are going to entrust the production of this album to an extremely experienced and well known producer. We need a guy who would be able to give Vader a new splendor. After 25 years the machine should be well lubricated and polished hehe... Of course, good producers cost a lot of money and Vader is still an underground act, but we have some ideas... We're also looking for some new graphic designers, photographers and so on."