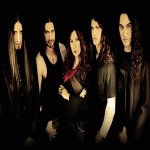 Chilean metallers Six Magics signed a deal with Coroner Records for the release of their new album entitled Behind The Sorrow, scheduled on February 15th 2010.

After the amazing success got in South America with their previous album and their promotional tours with bands like Nightwish, Blind Guardian and Rhapsody Of Fire, the female fronted quintet is ready to overrun all the other countries with their new amzing album, recorded, mixed and engineered by the legendary multi-platinum producer David Prater, the man behind the console for albums like Images And Words and A Change Of Seasons by Dream Theater. Behind The Sorrow is described as an heavy metal album with classic influences and prog shades, full of epic and orchestral moments, played with a modern and actual attitude.

A preview of the album cover art can be found here. The album title track can be streamed on the band's MySpace.