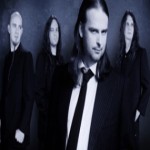 So I went to Blind Guardian's "A Twist In The Myth" European Tour 2006, this Saturday (September 30), and in one word, it was truly fan-tas-tic! Not only was it a very good show (maybe not the best ever, but still more than very decent) but most of all, it was the most pleasant show I ever went to!! I have never seen a crowd being so enthusiastic and elated on a metal concert as Saturday-eve. We totally carried Blind Guardian away on our hands.

We arrived in the middle of the Astral Doors show and there was already a lot of atmosphere in the place. Astral Doors played mediocre Heavy Metal with clear Dio-influences and can rightly be called a nice special guest and curtain raiser that play solid warming-up Heavy Metal songs. The place was crowded with 70% of people wearing their Blind Guardian shirts (including me) and 25% of other Power Metal shirts like Manowar, Hammerfall, Rhapsody, and you could feel everybody was very excited and was totally in the mood for a nice evening with the best Power Metal band of these days. And so, ten minutes before Blind Guardian started, everybody was already clapping his hands whilst shouting "Guardian!!" (clap clap clap) "Guardian!!" (clap clap clap). When the lights and the music faded there was a storm of noise of 350 enthusiastic fans screaming and applauding. I've been to concerts where the final applause at the end wasn't even this big and loud as now when Blind Guardian wasn't even on the stage yet and hadn't played a single note. We even exceeded the "War Of Wrath" intro and then, the storm was finally unleashed!

Although they were there to promote their lastest album, they didn't hesitated at all to play their classic and golden rocks one by one, and they even ended playing only "Fly" and "Another Stranger Me" from "A Twist In The Myth." After "Into The Storm," they whipped us up even more with "Welcome To Dying," followed by "Nightfall" and "Script For My Requiem," all of these blustered and roared along by the unleashed enthusiastic and highly wounded up followers of the Blind. Then came "Fly" (a song which I found better played live than on the album itself) and then came the über-highlight of the evening, "Valhalla!" Note that I'm deadly serious and honest when I say that even 3 minutes after the song was finished, the hordes were still singing "Valhalla - Deliverance, Why've you ever forgotten me" over and over again. Afterwards an enormous applause rose and when a wide smiling Hansi tried to say something, we started shouting and clapping "Guardian!!" (clap clap clap) "Guardian!!" (clap clap clap) again, again followed by an overhwelming applause. Hansi and the band clapped too, saying "thank you" in English and Dutch over and over again, but we were already shouting "Majesty" (clap clap clap), "Majesty" (clap clap clap). So Blind Guardian happily re-tuned their guitars and granted our request. After the brilliantly played song and a brilliant applause, the crowd started singing "Valhalla - Deliverance, Why've you ever forgotten me" again and you could see Hansi and the whole band were clearly pleased and surprised by our massive enthusiasm. Then they played "Time Stands Still (At The Iron Hill)" (of course followed again by the Valhalla chorus) and "And Then There Was Silence," another wonderful moment of the concert that took 14 sweet minutes.

And then came the expected encores since the crowd didn't decreased their volume at all. They played three songs: "Another Stranger Me," "And The Story Ends" and "Imaginations From The Other Side" except for the refrains which were word for word sang by the widely enthusiastic fans. The second obvious encore contained "The Bard's Song" again word by word totally sang by the crowd and as clincher, my all time favourite "Mirror Mirror"!! Afterwards came another 8 minutes of fame, joy and the awesome feeling of being worshipped by hundreds of your fans for Blind Guardian. All of the band members were clearly impressed and happy for the awesome evening and show.
Little by little we all left the place and you could still hearing cheers of the Valhalla refrain from all different directions.

This truly has been a memorable and splendid night! And I'm sure Blind Guardian will not forget the brave Belgian crowd that easily...
Blind Guardian simply rules, enough said!