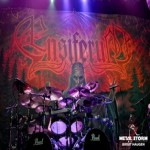 The attached pictures are just some samples of the gig, for the entire Paganfest gallery please check HERE.

Paganfest - America Part IV; and the pillage started in Denver, CO. A somewhat unusual town to start a tour and not many bands choose the Mile High City to begin their North American run, but hey - beggars can't be choosers. Especially since the headliner Ensiferum hadn't been in town for almost five years. I somewhat had an advantage since three of the five bands on the bill just performed on the 70000 Tons Of Metal Cruise the end of January. So it was nice to see familiar faces on stage and talk about the cruise adventures with them.

Ensiferum did a Meet and Greet before the show and I would say about 15 or so people actually paid the extra dough to be up close and personal with the band, get their pictures taken and get to hang out with them for a while. The Meet and Greet package also allowed the fans to stay inside the venue ahead of door times which was a good thing since the line was already snaking around the side of the building. 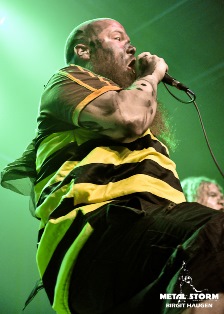 Trollfest
I was just fixing to start my interview with their bassist Sami when the doors did open and since both Sami and I do possess the gift of gab - well let's just say the interview took longer than planned and I still hadn't eaten dinner. Long story short; I honestly had the full intention to check out the first band on the bill, Helsótt but of course things don't always turn out the way we hope. Therefore I am sad to report that a review of their performance has to wait until they hit Denver next time around. 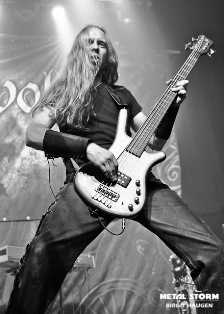 Heidevolk
Trollfest who are touring in support of their latest release Brumlebassen were the first band I saw this evening and while the guys really got the crowd going, they just didn't do anything for me. There was so much going on, musically with the instruments, on stage and while all of them played their respective one's great - well like I said, not my cup of tea.

Trollfest had some technical difficulties at the start of their set and that everything was delayed for 15 or 20 minutes didn't help neither since I feared that the other bands would have to cut their sets short because of it. And sure shit, the next two bands had to cut their sets but it didn't take away from the awesomeness of their performance.

Next up was Heidevolk and since they blew me away on the 70000 Tons Of Metal Cruise I was so looking forward to seeing them again. Since Denver was the first gig on the tour, hence the first time EVER Heidevolk was playing on our shores, the guys didn't know what to expect from the audience and they were really pleased with the outcome.

While the crowd was clearly into Trollfest, they really, really showed their Mile High Pagan spirit during Heidevolk. I was amazed on how many folks did sing along to their songs since all of them are sung in Dutch. It was a long time coming, shit the band has been together for over ten years, and the fans were eager to show them their support.

They ended their way too short set with "Vulgaris Magistralis" and promised to come back to the States sooner rather than later. Afterwards the guys were hanging out at the bar and took the time to speak with each and every fan and have their pictures taken with anyone who asked. Nice! 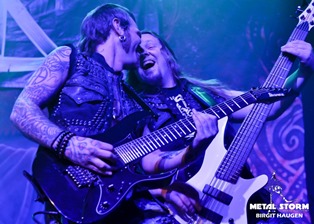 Týr
Faroe Islands warriors Týr were up next and while I had seen them tons of times before they never disappoint. To be honest I believe I haven't missed a single tour of theirs here in the US; and this fact alone is pretty significant since I usually tend to listen to much heavier music. Anyways, instead of fiddling around with the monitors, microphones and instruments during set change, the band decided to waste no time and actually fine-tuned said things in-between songs. No big deal - at least they made up some of the lost time that way.

Since Týr doesn't have any new material, their last album The Lay Of Thrym came out almost two years ago, the set list was actually no surprise to me. They played a couple of songs from their latest release and the rest were crowd pleasers such as "Regin Smiður", "Hold The Heathen Hammer High" and "Hail To The Hammer". Still, great performance and I can't wait for their new album.

Then it was time for the headliner to take the stage. Like I already mentioned, Ensiferum hadn't been to Denver in almost five years and the crowd was eager to see them again. Most haven't seen them perform ANY of the songs off their last two albums live and the anticipation grew with each minute during the stage change over. 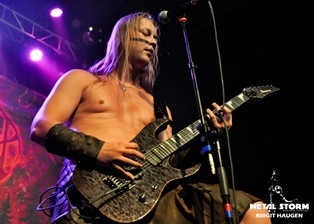 Ensiferum
While it was great that the tour started in Denver, one thing which wasn't all that great is that some of Ensiferum's instruments didn't make it on time. Apparently the airline fucked up majorly and the band had to borrow instruments from the other musicians on the bill. Sami was using Gunnar's (Týr) bass, Markus was using I believe one of Heidevolk's guitars and Emmi didn't use her own keyboard neither - what a mess. This of course meant that they couldn't play some songs off their last two albums (the ones the Denver fans haven't heard live yet), but I don't think the crowd held this against them.

Holy crap, the energy the band received from the fans was just amazing. Seriously, the mosh pits were stronger and wilder than at some thrash or death metal gigs. A lot of people were dancing, singing and just had a great time, therefore I hope this in turn has showed Ensiferum that the Pagan hearts beat strong here in the Mile High City and it won't take five fricking years for them to return.

"Battle Song" was of course the last song of the show and as I am not all that familiar with their catalog please google their set-list. All in all it was an awesome concert with a great line up of bands. The only downside was that I should have learned my lesson from prior shows (Turisas and Korpiklaani come to mind) and NOT drink with Finns - but I guess I am a slow learner when it comes to that.