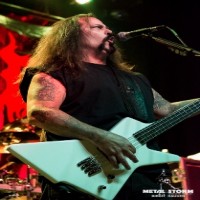 Another day, another show. But with bands such as Septicflesh, Inquisition, Abysmal Dawn and Carach Angren in tow, Deicide proved once again that they are still a force to reckon with.

Their 'In The Minds Of Evil' headlining tour rolled into Denver, CO and left the Summit Music Hall in ashes. Great line-up to say the least and with an attendance of roughly 500 plus, the Rocky Mountain metalheads came out to support and left satisfied. To be honest, this was the first time I had seen a line to enter the venue when Deicide was in town. But then again, it might have been because this was Carach Angren's first tour on our soil and no one was risking on missing them.

Don't you just hate when the first band starts playing almost at door times or shortly thereafter, and this band was the main reason why you even went to the gig? Thankfully this didn't happen and Carach Angren started their set about an hour after doors. Yap, those Dutch dudes were poised to get the audience in the right mood for things to come - and oh did they ever. Recognized (and followed) in the underground scene for years now, Carach Angren was worth the wait for those in the know and I believe this was not just a one-time stint here in North America and we will see more of them in years to come. 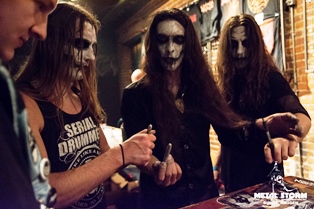 Carach Angren Meet 'n Greet
Sometimes, while you really dig a band's album, you just can't get into their live settings. Not so the case with Carach Angren; the crowd went nuts. While I am not overly familiar with their discography, most people in the front row definitely were and sang loudly alongside vocalist/guitarist Seregor.

The three-piece put on a stellar performance and afterwards they did an informal Meet 'n Greet which lasted halfway through Abysmal Dawn's set. They made sure EVERY fan was taken care of; be it having their picture taken or signing everything put in front of them. Very cool and not seen that often anymore.

Like I said, Abysmal Dawn was already playing and wreaked havoc on stage. The last time I have seen Charles & Co was in 2011 with Hate Eternal and therefore I was looking forward to their set; and it did not disappoint. Though their newest album Obsolescence had not hit the store shelves yet, they played "Inanimate" off it; a single they released awhile back. While this song is more of a mid-paced headbanging kind of deal, the rest of their set was more brutal, in your face death metal. 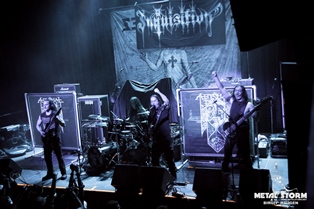 Abysmal Dawn
The crowd really got into Abysmal Dawn and the mosh-pit was going strong. Since I haven't seen or rather heard them in a while, I am venturing to say that Charles's vocals sounded especially gnarly that day; in a good way that is. And Scotty behind the drums looked like he was trying to destroy them. Wow, what a stellar performance. But with only 30 minutes to play, their act was over before I realized it. I hope that with the new album now released, they will hit the Denver region once again, sooner rather than later.

Set list (not in order and partial): Programmed To Consume, Rapture Renowned, My Own Savior, Inanimate, The Inevitable Return To Darkness, In Service Of Time 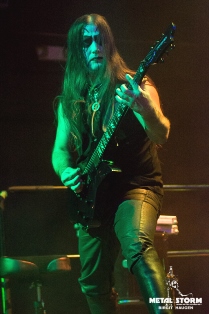 Inquisition
After two bands everything was surprisingly still on schedule and at 8:30pm it was time for Inquisition to take the stage. Throughout the day, every time I saw Dagon I jokingly called him 'rockstar', since let's face it, Inquisition had been touring their asses off the last couple years. Useless fact: I have known Dagon for years now and that night was actually the first time I heard him speak in his native tongue with some Columbian fans.

Still somewhat referred to as an underground black metal band, I believe they got shit tons of more fans (at least here in North America) when they toured with Behemoth earlier this year. That whole 'kvlt' and 'trve' and 'underground' persona is all fine and dandy, but it doesn't pay the bills. Inquisition has been around for a long time and I am glad they finally get the recognition they deserve, since, for a two-piece, they kick some major ass.

There was a reason why our members chose their 2013 album Obscure Verses For The Multiverse as best of the black metal releases for our annual Metal Storm Awards; it is awesome. And it was great to hear "Force Of The Floating Tomb" from it as the set opener.

The crowd really got into their set and while I did hear the Immortal references here and there, Dagon and Incubus can hold their own ANY day. Check out their band page to see if they play in a town near you and go support.

Set list: Force Of The Floating Tomb, Nefarious Dismal Orations, Command Of The Dark Crown, Those Of The Night, Astral Path To Supreme Majesties, Where Darkness Is Lord And Death The Beginning, Master Of The Cosmological Black Cauldron, Infinite Interstellar Genocide 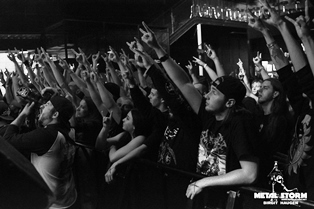 The Crowd During Septicflesh
With a 5 minute or so delay, and an intro which didn't seem to end, (seriously … überlong) the Greek Adonis's of Septicflesh came onto an almost pitch black stage and opened their set with "The Vampire From Nazareth" off their 2011 Masterpiece The Great Mass. They followed with "Communion" and the crowd went apeshit. I even caught Matthewknowsphotos, my pro temp Metal Storm photographer for 70000 Tons Of Metal, singing and growling along in the photo-pit.

Earlier in the day I talked with Christos how the tour had been going so far since Septicflesh was just in North America with Fleshgod Apocalypse in tow and now they play in front of death metal crowds. He told me that the reception of the audience to their music was very good on this tour and he was not kidding. Holy crap; at least in Denver they sure as hell gave Deicide the run for their money.

He also told me that for him the band started after their 2007 break and therefore it was no surprise that they only played songs from their last 3 albums. Regardless, they brought their A-Game and the fans responded with cheering, moshing and all that good stuff. 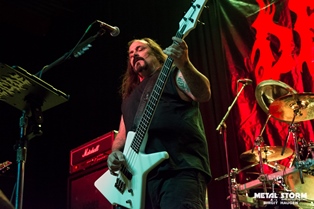 Deicide
The crowd hardly had time to catch their breath and about 25 minutes after the Greeks left the stage it was time for Deicide to turn it up a notch. And at this point in a Deicide gig review (for Metal Storm or otherwise) I usually state … blah, blah, blah, I'm really not the biggest fan of the band. Someone made me aware of this before I even put my thoughts to paper and I actually backtracked on how many times I have seen them; wellll, pretty much every time they came to Denver.

There it is and I have to concede: Hi, my name is D.T. Metal and I am a Deicide fan.

This was the first time I seen them after they released In The Minds Of Evil, so it was really no surprise to me that about 1/3 of the set-list were songs from their latest album. The new songs sounded awesome and the crowd was on fire; the mosh pit was insane. But of course the most response were to the 'oldies but goodies' such as "When Satan Rules His World" and "Sacrificial Suicide" to name a few. (the set list here is pretty accurate; I didn't get a picture in Denver)

Now for several years with the same line-up it really showed that Deicide are like a well-oiled machine. Steve was THE man behind the drums and it amazes me every time I see them live on how good he really is. Glen, while having a great time in all, somehow seemed to lose steam toward the end of their set, but hey, I will not dock him points for that. Denver's high altitude is known to affect the vocalist more than any other band member.

While some of the fans complained: "but they didn't play this song and that song", I was pretty satisfied with their set since after all, Deicide are still promoting their late 2013 release In The Minds Of Evil. It was a great night for metal in Denver. 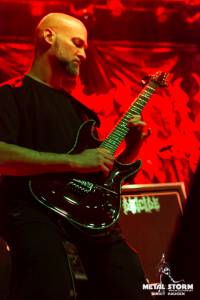 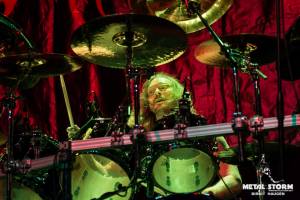 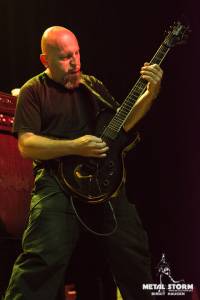 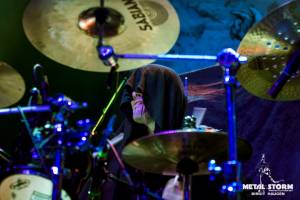 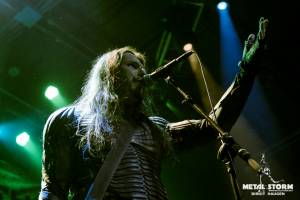 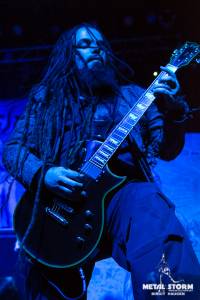 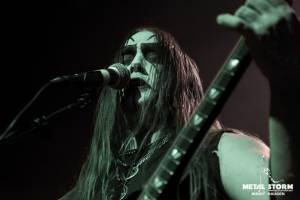 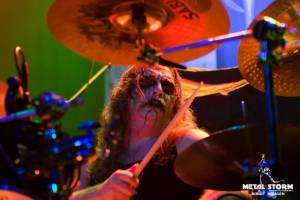 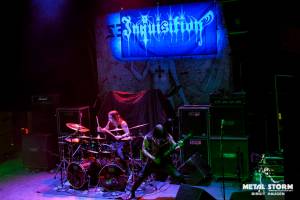 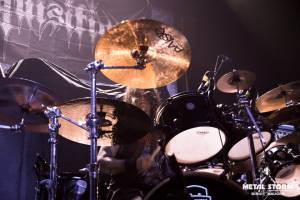 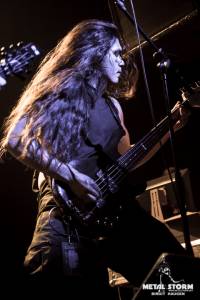 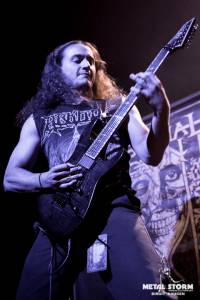 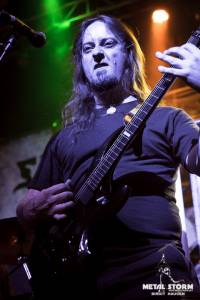 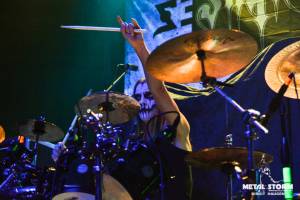 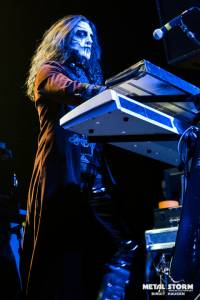 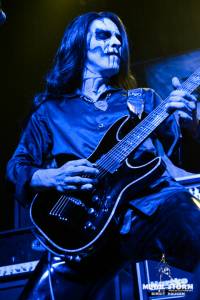