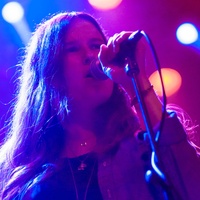 Black Mountain reappeared in my world sometime this spring around the beginning of April, when their new album, IV, was released. I knew and appreciated the band in the past, but the six-year gap between the releases sort of phased it out for me. Nevertheless, IV stormed my playlists and stuck to the top, hence it was only a matter of pulling myself together when I found out to my surprise that this Canadian quintet was doing a show in Helsinki. It's not exactly in my backyard, but, all things considered, is still a reasonable distance away with an overnight stay.

After a short beer stop at Bruuveri across the street from Tavastia, I had to conclude that the club hasn't really changed much since the last time I was there for a show, which, as it turns out, was quite a while ago - I believe it was Freak Kitchen some six years or so ago. The club is nicely spacious but appeared surprisingly empty around the time Kaleidobolt were supposed to start playing; the balcony was even closed. I know Black Mountain aren't that known, but this scarce crowd seemed a bit underwhelming. 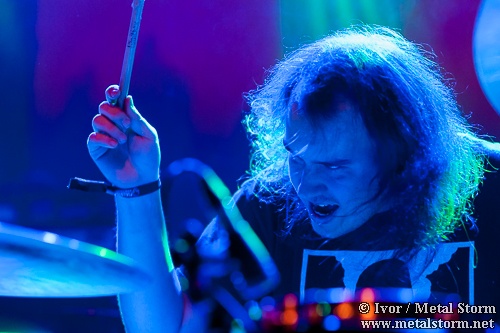 When Kaleidobolt kicked off, they were a sort of discovery for me. Powerful and energetic, this psychedelic stoner trio is best characterized by the guitarist and bassist constantly throwing their hair around during the heavier passages and a drummer with a manic stare in his eyes beating away at his drums like a madman. This kind of energy carries across, as it's enormously entertaining to watch and listen to. The sad part of it, though, is that I'm not having even half as much fun listening to the album afterwards as I was having while watching them play that night.

By the time Black Mountain queued the intro tune, Tavastia was pleasantly full, which, again, was surprising, but wholly for another reason - I was expecting a considerably smaller crowd. However, it's probably that Helsinki is so much bigger than Tallinn and that I'm used to shows around here where even very good and relatively known bands can only draw a handful of people out to a show. Finns know what's good for them and Black Mountain most certainly are good.

Black Mountain are a well-balanced mix between stoner and prog, psychedelia and space rock, male and female vocals. Their music is interesting to me in and of itself but it all comes alive on another level in a live show in a bouquet of swirling colours and sounds. It's the haunting psychedelia synth sounds of Jeremy Schmidt, it's the hippie-like bassist Colin Cowan in a world of his own, it's Stephen McBean with his great guitar tunes and vocals, it's Joshua Wells on drums doing stuff you wouldn't expect behind a simple drum kit, and most of all it's Amber Webber with her beautiful voice. During this show, a band as a whole entity turned into a collaboration of talented musicians interesting and spectacular in their own right. 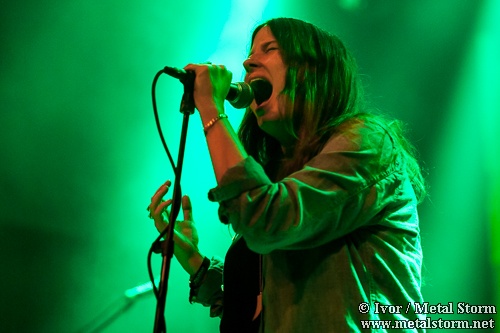 The band delivered a sizeable chunk of their latest album, IV, on stage, which on the whole suited me very well. However, as with any album that's been spinning an uncountable number of times you always end up wanting it all and are disappointed if something is not on the set list. I'm pleased they played "Mothers of the Sun" but disappointed they left out "Cemetery Breeding." I'm happy I got to hear "Defector" but I'm sad they didn't do "Constellations." I'm overjoyed at "Space to Bakersfield" but miss "(Over and Over) The Chain."

It's a twofold distracting and unreasonable feeling of wanting it all and getting only a part of it. That aside, though, it all flowed well together and everything else on the set list was also fantastic. A kind of a pseudo-problem is that at a show of this kind I never know whether to close my eyes and float with the music, or watch what the band are up to on stage, especially since the drummer appeared to be the busiest guy ever with so much going on. The real problem, though, is that the sound at the venue was so obnoxiously loud even with the earplugs that the tambourine seemed to cut through my skull. 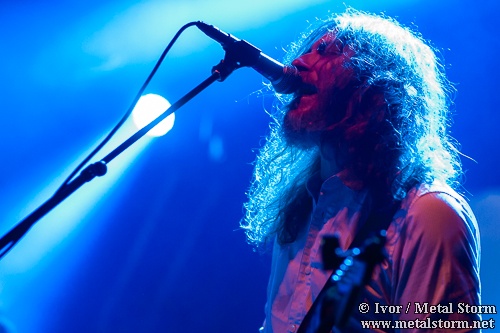 There also appeared to be some technical irregularities during the show, like the drummer getting part of his kit fixed and replaced. However, as I've learned by now, most of it can probably be written off as the band having faced the sad fate of falling prey to robbers at the beginning of the tour in Gothenburg. I salute the band for continuing selflessly and giving us the opportunity to see them perform. I salute all the selfless people who have helped them continue the tour by giving, lending, or selling the equipment that the band needed to do the shows and thus giving us the opportunity to see the band perform. And a big fuck you to all those selfish bastards that cross the path of artistic expression and try to take from us the opportunity to see the band perform. Fuck you! The show will always go on!