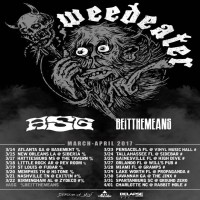 Welcome to the first in what will hopefully end up being a series of articles reviewing metal shows in that one state in America that's always felt like a nation within a nation. No, not California. Not Texas either, you fearsome don't-treaders. We are of course talking about Florida. Strap on those camo boots, bring a buck knife along, some jerky perhaps, and journey with me through tales of live jamz in the land of alligators, old people whose driving licenses need to be revoked, and drunk teenagers on Spring Break.

From the earliest days of its history, Florida, especially the Southern region, has always had this real rugged, "outlaw's land" aesthetic to it. We were one of the last states to develop roads and other infrastructure, have been a paradise for smugglers, gangsters, and escapees for years, and even now still have a wide portion of undeveloped, prehistoric-looking land. Naturally so, this all trickles down to the present day, translating to erratic behavior in its citizens (see "Florida Man"), a generally quirky atmosphere well suited for artists and the creative, and, in terms of live music, crazy venues that bands both local and national love sliding through and at which the "anything can happen" feeling reigns.

These articles will aim to shed light on some of the better venues down here for metal, some of the local bands down here you should check out, and also partly the uniqueness of the South Florida culture itself. There's no guarantee we won't encounter a gator or two on the way, so keep that buck knife handy.
It helps to not feed them in the first place... goddamn tourists.

THE VENUE AND THE CITY

Propaganda is located right smack dab in the downtown part of Lake Worth, Florida, where ya boi Apothecary hails from. Lake Worth is essentially the Southern, ass end of West Palm Beach, really more of a town than a city, having only about an 8 mile radius all around, and thus generating feelings of being very compact and being an area in which you can get from Point A to Point B pretty easily. There is a strong Hispanic presence here, but there are also a good number of hippie type white people, blacks, and Asians as well, creating a very cosmopolitan type culture that is easily noticeable as you roam around.

Propaganda is basically Lake Worth's dive bar venue, the one venue that just has the dirtier, crazier, more off the wall atmosphere than all the others. A tiny, hole in the wall type place, it was originally started as a punk and metal venue. Over the years, more hip hop, reggae, and folk bands have performed here, but Propaganda has always shown that it mostly still stays true to its roots. Like a couple weeks ago when they had the dirty sludgers in Weedeater come on through with ASG, with some locals backing them up, of course. 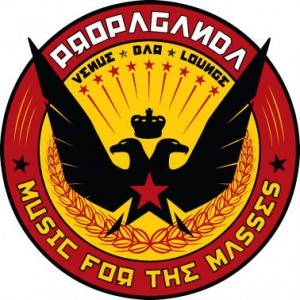 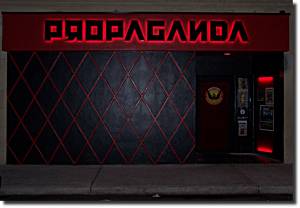 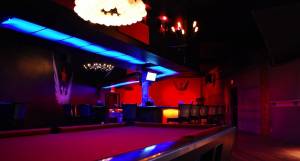 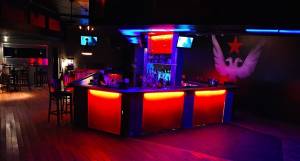 ROUND 1: HERE TO NOWHERE

The first band up on deck was Here To Nowhere, a local punk band. I've gradually been getting more into punk and hardcore over the past year or two through the avenue of sludge, so I've been a lot more open to discovering new bands, going to live shows, and so forth. These guys are some OK-ish Misfits-esque punk (sort of) from Miami. Not bad, but nothing to lose your mind over. As I had just arrived to Propaganda about 20 minutes before they went on, I more or less just enjoyed hydrating at the watering hole and occasionally jumping into the (tiny) mosh pits by the stage for fun with some other goofball attendees. Here To Nowhere were decent, but I got bored with them relatively quickly and went outside to chat with some friends before they finished, after a few drinks and some banging around to set the mood for the evening. Not a terrible band, just one that gets redundant fast and whose songs can really appear to just blur all together. 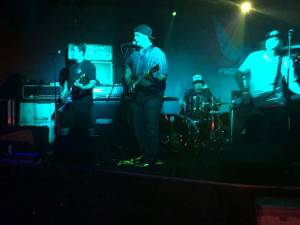 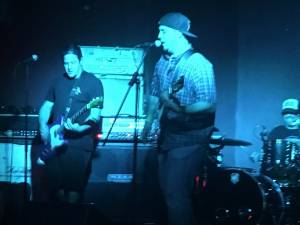 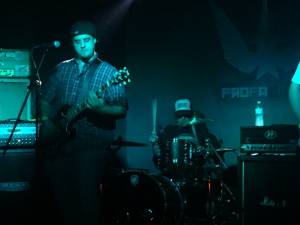 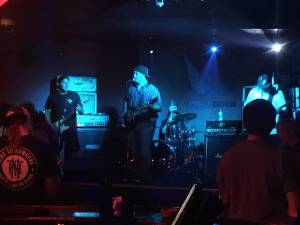 Next up was another group of local Florida punkers, albeit a much more stimulating and energetic one: The Muggles. These guys are a local favorite, known for really bringing the party and getting everyone's blood pumping. The band has a bit of a pirate theme that, while I haven't looked too far into it, is goofy and "not too serious" enough to really bring out that mood of the music being no less than fun jamz from some rabble rousers who just want to have a good time. The riffs are super catchy and have this strange quality about them of almost sounding classically-influenced, while still being obviously punk oriented. All of this would be incomplete, however, without the presence of The Muggles' highly charismatic frontman, "Captain Blackbeard" (rumored to be a distant descendant of Edward Teach himself.... shhhh, don't tell).

As the mateys were busy swabbing the deck onstage, Blackbeard was jumping around in the crowd belting out his powerhouse vocals, and even climbing up on top of the bar to do so as well at points (this is a regular occurrence with these guys). All the while, of course, he was taking swigs from a hearty bottle of Jack Daniels at his side, to ensure protection from that pesky scurvy while traveling through the South Florida intercoastal later at night to The Muggles' next destination. 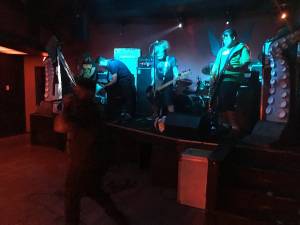 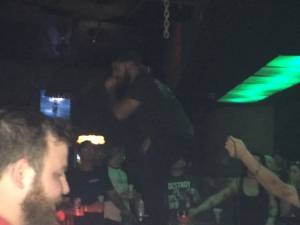 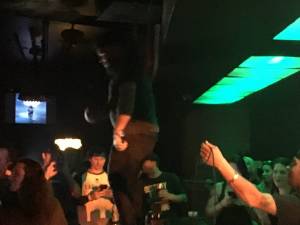 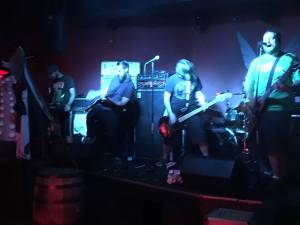 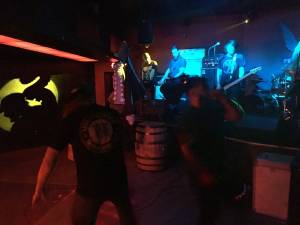 Here To Nowhere and The Muggles were both some pretty solid appetizers for the evening (more so the latter), but now it was time to get into the main course with some groovy stoner veterans. Not long after the departure of The Muggles, the bouncy stoner metallers in ASG came to the stage, and damn, did they tear the place apart.

It seems slightly odd to say that a stoner band "tore a venue apart," doesn't it? But nay, this is exactly what happened, because at this part of the evening, everyone (self included) had spent enough time hydrating at Lake Tanganyika to be considerably inebriated, to the point of frantic, raucous behavior being at a peak. ASG took command of Propaganda with those crunchy guitars, their pulsating rhythm section, and the soaring, "driving through the Mojave on six hits of acid" type vocals of frontman Jason Shi. I don't want to make a stretch and compare these guys against legends, but it kinda gave me an impression of what seeing Kyuss live back in the day must have been like. That suuuuuper riff heavy type sound, very bluesy at that, that just sucks you right in and doesn't let go, and that just makes you want to stare at your concert neighbor in awe like.... duuuuude!

Considering the presence of those hydrated circulatory systems that I mentioned, this set from ASG, surprisingly or not, yielded a bunch of moshing from the crowd. But as this was stoner metal after all, it was more of a.... "moshing in slow motion" type thing, which was absolutely hilarious to both watch and participate in. You remember the Candlemass video for Bewitched, don't you? Yeah, it was something like that. 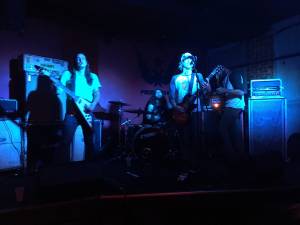 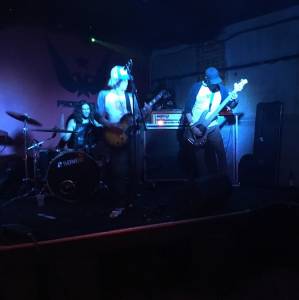 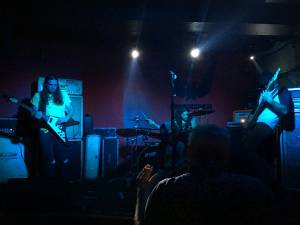 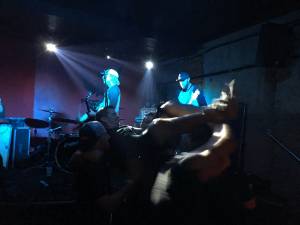 The ASG set was fucking good, to the point that afterwards some in the crowd were even saying that they stole the show and asking "how will Weedeater top that?" In retrospect, all I can say to that question is that Weedeater didn't necessarily top ASG that night, but they certainly weren't worse either. Rather, what you got with both bands were two pretty different, but equally as effective takes on the stoner/sludge approach.

As the clock slipped past midnight, the dirty, southern fried trio of Dave Shepherd, Travis Owens, and of course "Dixie" Dave Collins took the stage. After ASG I was sort of curious about whether or not the slow motion moshing would continue into this final set but... not so with Weedeater. Probably because these guys are a little less bouncy and mosh-able and are more about one or two riffs just set on repeat throughout their tracks. But that's not a bad thing by any means, and although one could complain about a lack of variation with the music in that case.... variation isn't exactly the point with these guys. Just pounding riffs from Dave Shepherd, a total beast of a rhythm section between Dixie Dave and Travis Owens, and (the icing on the cake), those gravelly, "drunken uncle" style vocals from Dixie Dave that I love so goddamn much.

As mentioned, there wasn't much motion for this set, more so people just standing transfixed at the heavy as fuhhhhh riffage and the funny faces Dixie Dave kept making at the crowd. It was super noisy too, to the point I kept wondering what people outside the venue just passing by must have been thinking. Thankfully Weedeater and Propaganda managed to close out the evening without any of those pesky noise ordinance Gestapo sliding through and ruining the mayhem. As Weedeater finished their set and gave a final salute to the crowd, it felt like the perfect end to a great night that had many memorable moments. 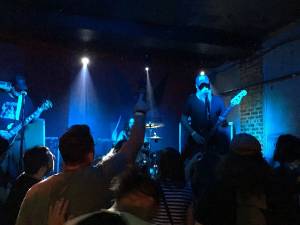 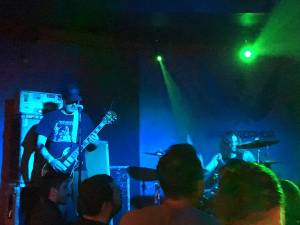 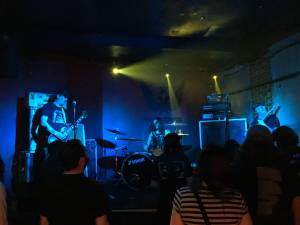 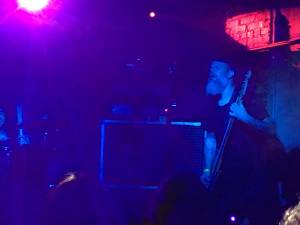 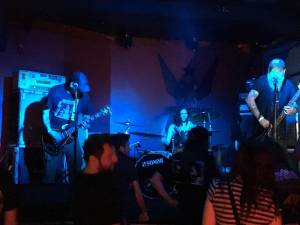 If I haven't already made it clear, this visitation to Lake Worth from ASG and Weedeater was just fun as all hell. It felt really special as well since Lake Worth is so tiny a city (like I said, it's more of a town) that not many national bands really come through here. A few years ago we had another venue that was pretty close to Propaganda, The Speakeasy, that started to attract quite a few national bands to the area (Skeletonwitch, Cattle Decapitation, Dying Fetus, a few others), but it got bought out and turned into a vodka bar about 3 years ago. Since then, Propaganda has essentially carried the sole responsibility of bringing big name metal and punk bands to the area, and while it isn't always that frequent an occurrence, they certainly did a great job with this show.

Of course though, Propaganda is not the only great venue to visit in South Florida for these kinds of heavy, metallic swampventures. Stay tuned for the next installations in this series, and we'll go deeper into what else is out there in the land of alligators, old people whose driving licenses need to be revoked, and drunk teenagers on Spring Break.

Thanks for reading, and check out the gallery if you're feeling so inclined!

Written on 15.04.2017 by
Apothecary
Comforting the disturbed and disturbing the comfortable since 2013.
More articles by Apothecary ››