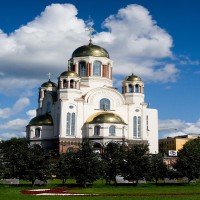 Chris Barnes's post-Cannibal Corpse career has been a wild ride. He formed Six Feet Under, he was in a fantastic commercial for a local car dealership, and I guess that's it. Things have been rough on the musical front for a few decades now, as you might expect from someone whose favorite pastimes include punching superior vocalists in the face, and Chris has now achieved the impossible by making music exactly as disgusting as the lyrics he so expertly composed during his tenure in Cannibal Corpse. I have so far reviewed five Six Feet Under albums for Metal Storm, and the highest rating I gave any was a 4.8. Recently, however, I realized that no one has ever given Chris the credit he deserves for 6FU's magnum opus, "Murdered In The Basement," which, believe it or not, is actually a very clever metaphor for the Russian Revolution.

Before we delve too deeply into this, it would be prudent to mention that you should listen to the song first. Here. I'll help you with that. If you read any of those reviews, and I certainly don't expect you to, you'll notice that I think very little of Six Feet Under. "Murdered In The Basement" is the only song of theirs that I find vaguely listenable (at least, both vaguely listenable AND also not completely ruined by Chris's bloody disgusting voice), and in fact I really like it. I've listened to it a few dozen times over the course of writing this analysis. Despite all the many criticisms I have to level at Chris Barnes and 6FU as a whole, and there are many, I must admit that I was forced to reconsider my opinion of them after decrypting the hidden genius behind this gem, and I now have a whole new intellectual respect for the man whom I now realize to be a passionate historian and social commentator.

The first and most obvious connection can be found in the title itself. The unfortunate murderees in said basement were, of course, the last Russian royal family, who were captured at Tsarskoye Selo and executed in the basement of the Ipatiev House in Yekaterinburg on the night of July 17, 1918. The "bloodstains on cement" naturally belong to the Romanovs; this cement, however, refers not only to the literal receptor of the pools of blood splashed out of them by Yakov Yurovsky, commandant of this "House of Special Purpose," but also to the permanence of their cruel fate in the Russian mind. Even after the demolition of the house at Boris Yeltsin's command in 1977, the site bore a special significance to recalcitrant royalists for decades. Today, there stands Храм-Памятник на Крови во имя Всех святых, в земле Российской просиявших (very briefly translated, "Church on the Blood"), a resplendent Russian Orthodox church that commemorates the Romanovs (saints in the Russian Orthodox tradition). "Cement on bloodstains," if you will. The blood of the Romanovs was to stain not only the humble floor of the Ipatiev House, but the consciousness of the Russian people and culture for many years to come.

The next line, "a hammer to the head," has more obvious symbolic significance, referring to the hammer of the industrial working man that would join with the sickle of the peasant farmer to form the universal symbol of Communism. While little evidence exists to suggest that the order to execute came from Lenin or any of the Soviet authorities (aside from a telling diary entry from Leon Trotsky), the executions still plainly came about as a result of the rising Red tide. "Something's rotten in the cellar" and "don't go down there!" both refer more literally once again to the bodies of the Romanovs and their associates, but also reflect the exhortations of the Soviet government in the aftermath - to Trotsky, not to pry too much into the events, and to the periodic mourners who remained loyal to the royals, to cease making pilgrimages to and leaving memorial gifts at the site. This surprisingly continuous stream of clandestine gift-bearers spurred the house's eventual demolition.

In the very brief verse, Chris exclaims, "I hate your fucking guts, your world makes me sick," likely from the point of view of Yurovsky or any number of other revolutionaries and directed at the tsarist regime. After all, by the time of the Romanovs' execution in the summer of 1918, they had already been removed from power several months prior and replaced by a provisional government (the result of the February Revolution). There existed among the Bolsheviks at the time a (false) rumor that the Austro-Hungarian troops planned to launch a daring rescue of the Romanovs, blood relatives of the various European royal families, which helped prompt the swift action taken that fateful night, but only a deep-seated hatred of the tsarist regime and everything it stood for could truly push the revolutionaries to such cruelty. The second half of the verse provides an interesting counterpoint; taken at face value, "tell me what to do, I got a special place for you" merely describes the murderer, voiced by Chris, recounting his frustrations with the oppressive and domineering attitude of his victim and preparing to take revenge (as in, "Tell ME what to do, will you? We'll see about that!"). After digging a bit deeper, however, the phrase reveals an observation of Russian governance throughout history. Russia, in its various incarnations, has been largely an autocracy, or at least an oligarchy, for centuries upon centuries. Whether under kings, tsars, boyars, Party chairmen, or everyone's favorite shirtless bear-wrestler, the Russian nation has almost always existed under some manner of authoritarian power, and despite the longstanding infatuation with Western philosophy and culture, the collapse of one system has never been enough to encourage a truly democratic one in its wake. "Tell me what to do," voiced in accusation and derision according to the literal interpretation, is actually a plea from the Russian people to the next leader waiting to assume control. The "special place" is the seat of absolute power.

The "concrete grave" referenced in the first line of the next chorus makes the same statement as the "bloodstains on cement"; a concrete grave is an inauspicious one, certainly for a proud royal family, but at the same time it is solid and permanent, a testament to the events that necessitated its existence. What comes next, however, is more interesting. "An ice pick to the face" refers to the assassination of Leon Trotsky by NKVD operatives in Mexico. After years of exile and being hunted unsuccessfully by Stalin, Trotsky finally met his fate at the hands of Ramón Mercader, who attacked Trotsky in his own home and fatally wounded him with said ice-related instrument (technically an ice axe, but shut up, I've gotten this far already and I'm not turning back). This took place in 1940, well after the Revolution had ended, but Lenin and Stalin had vilified Trotsky for decades due to his perceived betrayal of the Bolshevik ideologies and subversive actions; Chris brutally echoes their message, that the Revolution must be completed and couch no traitors.

In the bridge section, the "concrete grave" image repeats once more, but precedes the new detail, "after you're dismembered and raped." I posit that this intermediate passage comes from the point of view not of the Revolution's perpetrators, but from the Loyalists (who later became the dissidents), and those throughout the Soviet Union's existence who resented the oppressive Communist rule. While Yurovsky and his guards neither dismembered nor raped any of the Romanovs, rumors to that effect would be exactly the sort of anti-Party propaganda whispered by White Russians to stir up anger - or even by particularly violent Reds who believed that the old regime deserved to be brutalized. Perhaps it refers to Mother Russia, and the raping and dismembering of Russian traditions and culture (though the party responsible for this and the acts in question obviously depend on the bias of the listener). The "skeleton's hand shoved up your ass" makes obvious reference to Lenin, whose embalmed corpse resided for many years in his Mausoleum in Red Square. While a crude image, it does reflect the sense of Lenin's constant presence in the Soviet state mythology and the sacrosanctity of his legacy, extending far beyond the Revolution itself and into generations of propaganda and identity. "Food for the worms and rats," best I can figure, is an oblique reference to the scene in Sergei M. Eisenstein's famous 1925 film Battleship Potemkin when the ship's crew, faced with worm-eaten, maggot-infested rations, rises up against the officers and carries off a spectacular mutiny. This 1905 rebellion was one of several precursor events to the 1917 Revolution, and seeing as the film became not only a masterpiece of film-making innovation but a powerful propaganda piece for the nascent Soviet state, it seems appropriate to mention.

Now, "time to dig a hole" and "lyme to cover the smell" seem to follow the events of the Revolution, edging towards the days of paranoia, purges, and Stalinist Terror. Obviously these lines are all about making certain undesirable elements disappear, like a journalist from his bed in the middle of the night or a general from a photograph of Stalin. Nobody covered up anti-Party sentiments quite like Stalin, which was one reason why Lenin warned his compatriots about him in his will. So perhaps we have left the immediate world of the Revolution by now, and moved on - to something that seems even worse than the old regime. Skipping ahead a bit, "killing for revenge" and "a knife stuck in my back" similarly reflect the cutthroat paranoia of Stalin's reign, though they could also be applied to the years of Revolution. "Killing for revenge" is self-explanatory; the knife in the back could be expressed by the tsar, lamenting his betrayal by his people, or perhaps the people, feeling that the tsar had betrayed them after all of their servitude and subservience.

I'll admit that "an eighth hole in your head" has puzzled me. What are the eight holes? I feel it safe to assume that the "head" belongs to the tsarist regime, and that these eight holes are some aspect or institution of the Revolution/Soviet Union being inflicted upon the regime. I guess the Revolution kind of lasted eight months, from March 8 - November 8 (or February 23 - October 25, by the Old Style). Yeah, that'll do. Eight months, eight holes in the head, it fits. Never expected to get this far, frankly.

There you have it, ladies and gentlemen. Chris Barnes is a genius on the level of James Joyce, cleverly telling us a chilling and informative tale of the Russian Revolution under the guise of singing about some random act of violence. Truly, Six Feet Under is the greatest band of our time.