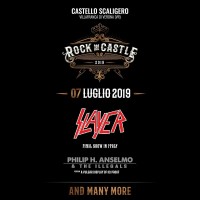 The beginning of July was scheduled for a very special event, a festival happening at quite an unusual yet extraordinary place. It was time for Rock The Castle festival in Verona, inside the walls of Scaligero castle, one of the most exciting places being featured on my 'hunting' bill. My plan was to attend the third and last day of this three-day festival. As you can see below, the line-up was pretty darn strong, explosive and very experienced, with the mighty Slayer in the main role. Onslaught, Overkill, Philip H. Anselmo & The Illegals (playing only Pantera set), Gojira. All of them with 30+ years long careers (except for Gojira) and basically a 'headliners of their own tours'. This venue already hosted some musical acts in the past, however, if I'm not wrong, this is the very first festival organised within the walls of Scaligero Castle. 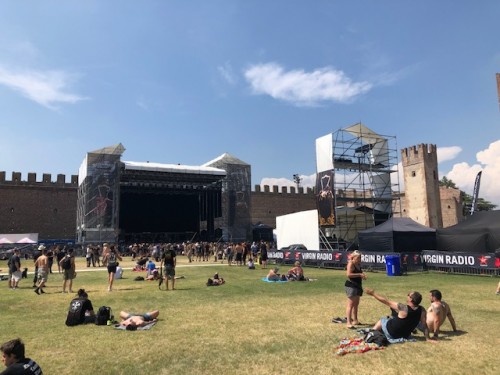 My day at this festival began with the appearance of UK thrash metal veterans Onslaught. Not that I wouldn't care to take a look at the first group prior to this one, but our arrival to the venue was a bit late. This was my first time seeing this band live. I've been acquainted with them for a while, but have never taken a serious look at their music in general, just here and there. Although Onslaught started with their performance at the hottest time of the day, there were lots of people gathered. Personally, I didn't find a lot of refreshment in it, nor was I witnessing a groundbreaking performance from them. It was solid, to say the least, but I guess their music doesn't impress me as much as some of the following does. 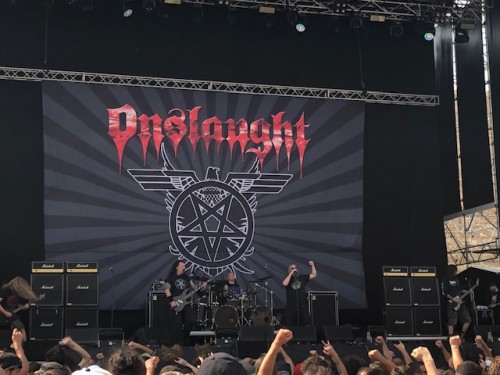 Alongside Slayer, who were the main attraction this day, this next band on the bill was one of those that I had been chasing to see live for quite a while now: long-running US thrashers Overkill, fronted by vocalist and founding member Bobby Ellsworth. Almost 40 years of existence, 19 studio albums, countless live gigs…well, Overkill still look in amazing shape, with a fair amount of dynamite left in them. I would imagine that it's kind of hard to put together a one-hour-long set list from such an expansive discography as they possess. As you can see, all of the chosen songs were actually coming from their last and first decades of releases, except for W.F.O.'s "Bastard Nation." Bobby Ellsworth is definitely an icon, not only in the thrash metal world, but among all living vocalists. With his distinctive, recognizable vocals and energetic on-stage appearance, he really knows how to "upgrade" the already well-oiled performance of the group and experienced co-members. The crowd was also feeling more vibes, giving more feedback than during the Onslaught show. For me, a one-hour-long set went by too fast. I'll definitely try to catch these guys live again as soon as possible in the future. 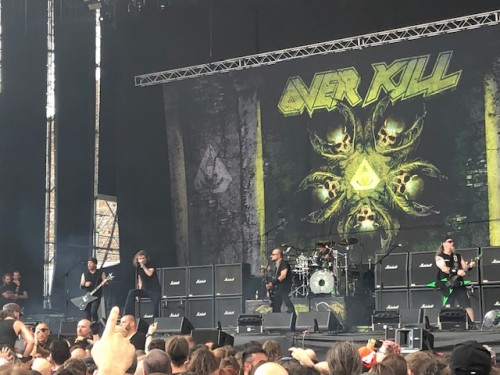 Philip H. Anselmo & The Illegals, led by the charismatic Philip H. Anselmo, were next in the line of performers. On this summer tour across Europe, the band decided to play an entire set consisting only of Pantera songs. Definitely a decision that brought additional fans to most of their gigs, I presume. Even though this event was still more or less about Slayer than anyone else, Anselmo and companions lifted the crowd immediately. 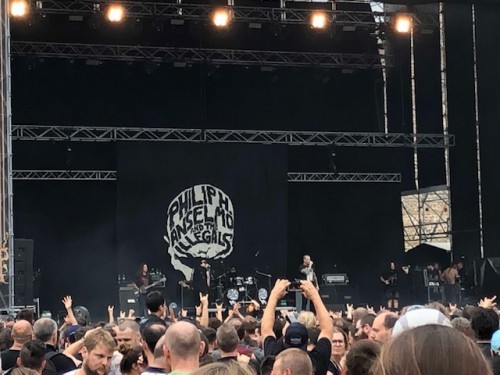 As I mentioned the vocals of Overkill's Bobby Ellsworth, something similar could be said about Anselmo's. Distinctive, with his own low, hoarse-sounding, sometimes grunting "output." It can be heard and felt in a moment. Anselmo, as charismatic and sometimes controversial as he is, with his attitude and approach on the stage, is able to put the crowd into some kind of delirium, making the show even more intense than it already is. Despite his "overused"-sounding vocals, the classic Pantera songs and Anselmo's "I don't give a fuck" attitude worked their charms all the way. The crowd was wild and was loving it immensely through every single song. More than half of the set list included songs from the Vulgar Display Of Power album (6 out of 10). I can confirm that this was the "hottest" show out of all five performers at this festival that day.

If you look down the line-up, you'll immediately notice an "outsider" among the listed bands. French quartet Gojira was the one. Of course, I'm referring to the genre deviation and nothing else. Nevertheless, the guys from Gojira were taking the hot spot of performing last before Slayer. Some might have found this arrangement of the line-up a bit odd, but I was not bothered by it. Following a pretty damn hyped-up performance of the Philip H. Anselmo & The Illegals crew, Gojira had to step up to hold the level of excitement among the crowd. The outcome was easily predictable... they couldn't "compete" with the Pantera set. Still, Gojira managed to pull off a very intense, solid show, especially with showing off their talents in both technical abilities and well-maintained professional attitude on the stage. I can say that they operated decently among all the veterans and legends performing at this festival. 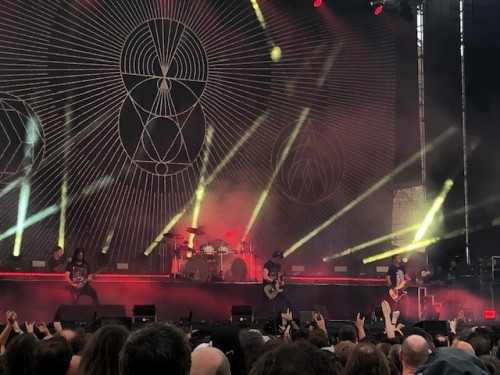 After four bands, a fair amount of great music, and many more or less uplifting moments throughout this day, it was time for the headliners, the legendary Slayer. Unfortunately, their 1.5-year-long final world tour is slowly coming to an end. It's interesting to read some comments about them, that it's about time to end their career and similar sentiments; those are very limited ones, such as they are, though everyone has their own opinion. Slayer, however, as old as they are, having produced their best music in the '80s, can still put on a heck of a show. For the last couple of years they've had a changed line-up, but believe me, both Gary Holt on guitar and Paul Bostaph on drums are actually even more exciting to watch live up on stage than Tom and Kerry are. This was my fourth time seeing them live, the first time being in 2010 with Metallica, Anthrax, Megadeth, and Alice In Chains. The second time was three years ago in Vienna and the third time last November, also in Vienna, which I actually thought was going to be the last time. 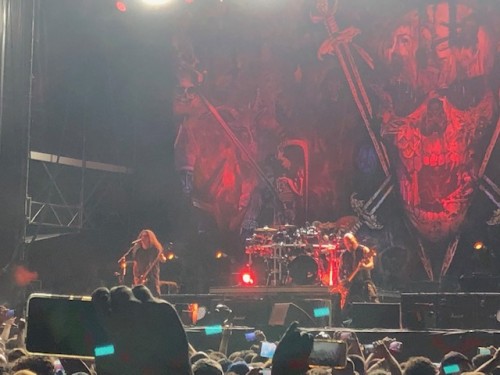 And here they were. With the usual "Repentless" kick-off, Slayer continued their performance with the span of memorable, legendary tracks that sealed their career as one of the most iconic bands on the world map of metal music history. In anticipation of a special show, the fans were very excited, as expected. I must admit, however, that I felt the lack of that usual Italian temperament and chanting/screaming moments (taking into account that there were more or less mostly Italian people at the festival). To me, it's always a pleasure seeing Slayer live. I do not consider myself a hardcore fan, but listening to those monumental tracks from the '80s, it's just something I could never be fed up with. Out of all four shows I've seen, this wasn't the best one, but still it does leave a special mark on my touring cycle, especially being the last Slayer show I'll ever attend. 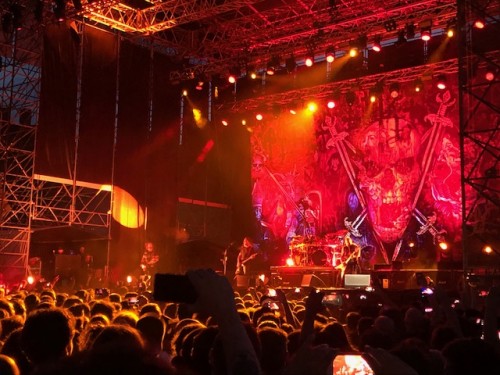 
Upcoming scheduled concerts (till the end of 2019):