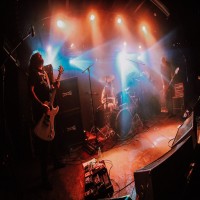 Okay. I'm merging two rounds of shows - basically writing about both of them at the same time, because I attended two different shows on the same evening. Same city, two different venues, and two completely different genre-oriented acts, performing an hour apart. It was actually more of a coincidence than planned in first place. I had purchased a ticket for the Conan gig a couple of months earlier, so I simply forgot about the exact date of the show when I bought a ticket for the Clowns gig. When I realized my mistake a couple of days prior to the events, I just hoped for a lenient time schedule. I didn't want to bother with the ticket returns for either of the gigs, because both cost just 10€. Luckily for me, I did catch both of them, though not full sets. Clowns were scheduled for 10:00 pm and Conan for 10:30 pm. A car ride between the venues is approximately 10-15 minutes. This type of situation is common to bigger festivals with many bands performing at different stages at the same time.

The "express" concert evening, featuring two separately located shows, began with hardcore/punk rock operators Clowns from Melbourne, Australia. Formed in 2009 as a "high school band", they've grown into independent, creative musicians who have achieved quite a decent standing among their peers. This one-month-long European headlining tour is also strong proof of their status as a rock-solid standing act after a decade-long career. I wasn't very familiar with Clowns prior to this particular event, just checking them out quickly on short notice, but since I'm fond of hardcore and the punk rock-related scenes, I decided to make a stop to see them before heading out to the Conan gig shortly afterwards. Sometimes you can predict or assume what to expect from a particular band's performance if you get to know a couple of facts, even if you haven't listen to the music at all - at least, that works for me on certain occasions. This was one of those. Utilizing their energy and vibe, the five-piece offered a severe dose of pumped-up, high-voltage presence on the stage. Even though my visit was shortened into a 40-minute-long set, making a sort of a 'bluff stop', this one evolved into a not-to-be-missed gig in the end. 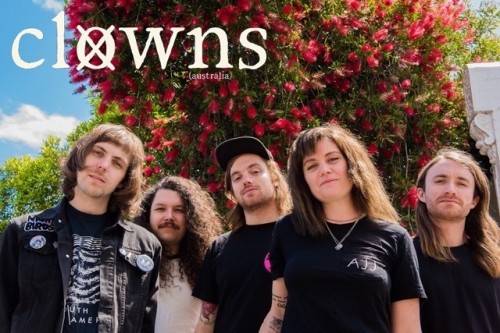 While the Clowns show turned out to be a successful blind date, the following one of Conan was a Brazzers after-party. By that point of the year, I'd seen a fair number of bands, and while I said to myself that no one would come close to Lightning Bolt's high-standard live sound (even though it was only January), in terms of being "loud as fuck", crushing, and nearly obnoxious, Conan managed to achieve almost the same level. I can't say that I'm that fond of their music, but that's why attending all sorts of gigs is so much fun and many times unpredictable. Some of the credit can be attributed to the acoustics of the venue. It's like 99% verified. I can undeniably confirm this certain fact after having attended many shows there. Even though I did miss probably around 15-20 minutes of their set at the beginning (not mentioning the support acts, which could also be counted in), I still caught an hour of a percussive and vicious wall of sound that managed to abuse all of my senses pretty darn hard. If you feel competent enough to put up with Conan's colossal live sound, then hesitation is out of the question.