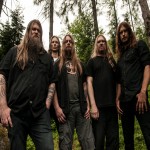 Enslaved took part of the inaugural Barge To Hell cruise in December 2012. In between all the fun, concerts and what-not-ever, I had the chance to sit down with the entire band to talk about their new album among other things.

D.T. Metal: Since this is your first time playing on a boat, what are your impressions so far?

Grutle: A little bit absurd, but absurd in a good way. Since we know most of the bands playing on here, there is a whole bunch of buddies and we are having a good time together. The weather is nice; the food is good and obviously the drinks. So yes, we are actually having a blast.

D.T.M: Since you obviously didn't bring your entire backline from Norway, was it difficult to work with the equipment provided?

Cato: I was told that there would be a drum rack but there wasn't, so I have a bit of a problem with the drum kit falling apart. But thankfully I got some help from Behemoth's drummer.

Grutle: It was close enough, other than the drum issue everything was good; kind of like on a big festival.

D.T.M: You guys just released a new album which was highly received by fans and media alike. Did you do something different in regards of the writing or recording process?

Ivar: RIITIIR is a little more free minded in the sense that the song structure, especially the length of the songs and perhaps the recognizable Enslaved song structure formula is not present as much on this album. But when the songs were made and we started to rehearse them it was easy for us to hear that the songs themselves were so strong that we could manage without the regular structure.

Grutle: They evolved in their own momentum so to speak.

Ivar: I think what people appreciate about the new album is that we managed to surprise them. They either thought it would be more mainstream or even experimental and hard to catch on. But the melodies, the performance, and the vocals just fit so good together that you can appreciate the album without being very interested in prog-rock. It's enough if you like heavy metal I guess.

D.T.M: Is that something you will continue for the next record then?

Ivar: Not necessarily the style, but the thinking of that we just have to do what feels natural when writing a song. But that has to go both ways. If the next album turns out to be three minute rock and roll songs - then so be it. Honesty has to go both ways.

D.T.M: There are more keyboard parts on this album. Was that a conscious decision or just turned out that way?

Herbrand: Not really; we are just trying to make the songs the best they can be.

Grutle: Absolutely nothing is ever conscious in this band. (everybody laughing) But it's true since we never know what the results are going to sound like; we just go with the flow.

Herbrand: We just try to figure out what can make a song better and what might fit here or there.

Grutle: To have a certain plan will kill off all the natural creativity. This goes for the arrangements and the song writing; if you have a specific plan than you are kind of - enslaved. (laughs)

D.T.M: So at what part in your songwriting or recording are the keys incorporated?

Ivar: It varies; sometimes the keys can be an integral part of the written riff; to add an orchestra and to bring out that melancholic sound. But sometimes the riff is not enough with just a guitar and you need a piano or whatever. But other times it's just sound specific. I would say most of the time the keys are added at the same time as the other stuff. The riffs are delivered from the guitar, and then everybody else adds their parts.

I think that's the difference from when before we had a keyboard player. Earlier it was something you put on last; like the icing on the cake, but now it's an instrument and as natural as a guitar. I think it's also equally important to know when not to add keys.

Grutle: (with a strong English accent) Extremely well not played, I'd say. (everybody laughs)

D.T.M: What is next for Enslaved after the Barge To Hell cruise?

Grutle: (being ever so funny that day) We quit, that's it, we all jump overboard after last gig on the ship. (laughs) But no, we are coming back to the States the end of January and tour for about a month. Then we will go home, stay for about a week in Norway and then we will be doing a European tour. And then of course the festivals in Europe will start up by then.

D.T.M: Cool, now the famous last words to your fans.

Ivar: The famous last words - before we hit the iceberg. (laughs)

D.T.M: Well I think we are safe here from icebergs but we are close to the Bermuda Triangle.

Ivar: Oh cool, I didn't know. In that case it's time to thank everybody that has been following the band, especially the last six or seven years when we made such a leap in our career. It's important to remember that the reason we can do what we do is because people like you all go to our shows and buy our albums.

Grutle: Yes, thanks for supporting and following us throughout the years.

D.T.M: Just to touch on this real quick; do you think you lost some of your old-school fans over the year because of the diversity of your albums?

Ivar: If others are moving in a straight line than maybe Enslaved is moving in a "S". Now it feels like we are meeting people again who might have fallen off the "crazy wagon" at some point and now they are somewhat rediscovering Enslaved again. I guess we are doing this to some point as well. In the middle, we were experimenting a bit but now we are reconnecting back with our roots.

Grutle: In that aspect, I guess a lot of the Norwegian bands who started up in the early Nineties have lost fans too because people tend to be fans of early Norwegian metal and not necessarily a particular band. So a lot enjoyed the first two Enslaved albums or the first two Darkthrone albums.

Ivar: They are more fans of the Nineties.

Grutle: Exactly. But the true Enslaved followers have been with us until now. We have fans that have been following our every move for more than twenty years.

Cato: They developed parallel with the band, so to say.

Special thanks to Björn from CMM GmbH for setting this up and of course to the entire Enslaved band. All of the members were present for this interview but Ivar and Grutle took command.