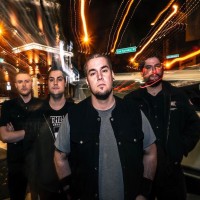 Hatriot originally started out as the band in which Exodus vocalist Steve Souza played with his two sons, Cody on bass and later Nick on drums, but after two albums, Cody took over his father's vocal duties as Steve remained in Exodus. Slowly becoming its own band rather than "the almost Exodus" band, especially with the latest record, The Vale Of Shadows, Hatriot became a pretty interesting thrash metal band in itself. I wanted to know a bit from Cody about what that process was and how it was to grow up as the son of a famous metal vocalist.

Hatriot's The Vale Of Shadows is out through Massacre Records.

Posted on 12.08.2022 by
RaduP
Doesn't matter that much to me if you agree with me, as long as you checked the album out.
More interviews by RaduP ››