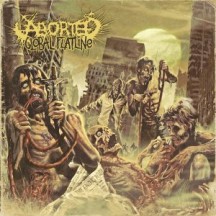 
Aborted really have pushed the boat out with Global Flatline, and even if the only down-side is that most of the Coronary Reconstruction EP finds its way onto this album too, they are totally re-recorded and much faster, heavier and bloody brutal.

There'll always be someone who finds the effort to whinge and moan about a band deviating from their original sound, but Global Flatline will emphatically put a boot into these faces with its much more brutal approach to death metal than the last few. It's the same brutality we both suffered and enjoyed from the Engineering The Dead album, but with a much tighter band, a clearer sound and a whole lot more swagger.

Global Flatline has taken brutal death metal and modernised it. Aborted make brutal death sound cool and accessible for the first time, ever. Yes there are modern influences present, but over and above everything else Global Flatline is a full-blooded assault.

The band have been tweaking and experimenting with their sound for years now, but Aborted have never sounded better than they do here. They have somehow surpassed the boundary between sheer brutality and catchiness, in that neither is compromised for the other. Global Flatline is a rapid-fire monster that will hook you and keep you going back for more.

If you've been following Aborted for the last decade, chances are you'll know what you're getting yourself into with Global Flatline. With this album however, Aborted have managed to combine the new and old with only the best aspects of each respectively. Global Flatline is brutal, crushing and aggressive, but it also sounds clear and has enough personality and attitude for it to become almost addictive. Aborted really have outdone themselves this time.