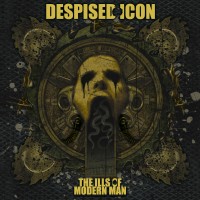 
The now defunct Despised Icon was one of many bands that fell under the hated category of deathcore. The hate is not justified with this band, they produce new riffs and do not recycle their music over and over again, that being said I found this album to be average.

When I gave this album a spin I was happy, but not as happy as I thought I was going to be; it let me down in a few categories. The first would have to be the riffs, they were okay, but they seemed watered down and lackluster compared to older Despised Icon. The second were the vocals. Don't get me wrong, they have their moments, especially the pig squeals, but if you take these and compare them to older Despised Icon, old Despised Icon wins hands down. They have more effort put into them, and they come from the soul, while the vocals on this album just feel fake. The drumming on this album is good, it shines its brightest during the breakdowns, where blast beats and crashes reign supreme.

The overall reason why I didn't really enjoy this album, is that even being completely different from all other deathcore bands, their sound has gotten boring. Everything they have done on this album has been done on the previous ones. Minus the few good drum and vocal parts there is really nothing distinguishable in this album.

Overall, I was disappointed with this album; I wish they would have taken the time to write more original material.