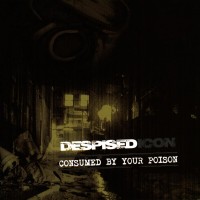 
Despised Icon hail from the tr00 Kvlt, Montréal, in northern Canada. However even being from such a tr00 area these guys play something that's as far way from tr00 as we are from the sun. Yup, you guessed it, deathcore.

Now that being said they aren't playing your pansy-assed run o' the mill we dye our hair and stretch our earlobes deathcore, no, they play REAL deathcore. The music sounds like a zombie apocalypse movie soundtrack: fast, nasty and short, some even clocking in at under a minute. Grindcore lengths aside, the talent shows through in this fantabulous album. Chugging breakdowns, slamming drums, and my personal favorite, shrieking, madman-like vocals. Oh, and did I mention there are two, count 'em TWO, vocalists? You might think "oh, well they have two vocalists, what kind of crazy circus act is this?!"

Instead of just being some kind of show, or act, the two vocalists definitely shine here, with one handling the highs, and the other the lows. Both vocalists combine into one powerhouse that makes you want to bare-knuckle box Brock Lesnar, they definitely make this album.

The breakdowns are defiantly noticeable, especially in songs such as Le Chểne Et Le Roseau. However, instead of ruining the album with constant breakdowns, they are set and displaced sporadically throughout, and are placed in perfect form, so perfect that you would severely miss them if they were gone. After all, what is deathcore without breakdowns?

(nothing, in case you couldn't pick that up)

Overall, buy this album, if you love deathcore, you'll have to change your pants, if you don't, I bet you a five cent piece you'll love this album.