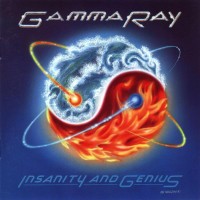 
Of all Gamma Ray's albums, their first three have always had that Helloween feel to them. As band leader Kai Hansen had written a fair bit for Helloween, this shouldn't quite come off as a surprise. But of each of Gamma Ray's first three albums the Helloween influence is most noticeable here, on Insanity And Genius.

This was their third full length offering, an album which turned out to be the final album that the band recorded with Ralf Scheepers on vocals. It's quite strange how the band came up with this release, as it's sandwiched in between Sigh No More and one of metal's finest albums (certainly Gamma Ray's best) Land Of The Free, but somehow, it still managed to happen. Insanity And Genius is an extremely solid album full of melodic power metal anthems. Ralf Scheepers gives an energetic performance, and Kai Hansen's guitar work and songwriting are every bit as good as they were on the band's debut. The production is not as good as Sigh No More, but this raw sound gives an extra touch. Lots of songs on the album are made of killer vocals, intelligent lyrics, insane guitar solos and powerful hard 'n' heavy riffs. When you compare this studio album with any other from their discography, you can clearly notice that this is their weaker effort. But does that fact make this studio album suck?

In my opinion, this is not Gamma Ray's weakest album, that honor goes to its predecessor Sigh No More. But it does take a back seat to the debut and all of the post Scheepers material. It's not a matter of how bad this album is, but how amazing the others are.