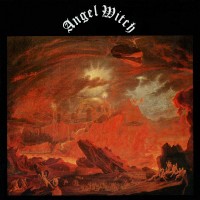 
Angel Witch is, to me, one of the biggest "what if" bands in heavy metal. The frequent changing of the lineup and delegation of vocal duties from Kevin Heybourne to others after their phenomenal debut resulted in two follow-ups that, while not altogether terrible, contained none of the energy, personality, or brilliance of the first landmark Angel Witch album. If only the trio had stayed intact, Angel Witch could very well be one of the most successful bands on the scene today. Who knows what other great works they were capable of back in their prime? Instead, we must remember them for this one-off masterpiece.

Angel Witch is the crystallization of the New Wave of British Heavy Metal sound. It is similar in style to contemporary releases such as Iron Maiden's self-titled debut, Girlschool's Demolition, and Judas Priest's Screaming For Vengeance, combining riff-centric songs with a punk attitude and an instantly recognizable voice. Kevin Heybourne's vocals are perfect for this kind of music: thin, raspy, and almost strained at times, but capable of hitting high notes when appropriate, and as firmly lodged in the new generation of heavy metal singers as it got back in 1980. Heavy-handed, bluesy overtones of early metal are nowhere to be found on this record, except in the occasional Black Sabbath-influenced riff (i.e. "Free Man"); the slow, thick, pounding musical fusion that dominated the original scene have by this time given way to fast, metallic, proto-thrash with production that, while not especially professional, perfectly complements the band's sound.

Just as the influences of Black Sabbath, Rainbow, and the punk scene are palpable on this album, so, too are the ways in which Angel Witch would influence future generations of the thrash, power, and even black metal movements. Early Slayer has "Angel Witch" written all over it, and this album is musically similar enough to Mercyful Fate to be viewed as a reasonable influence on the very early stages of black metal's infancy.

Angel Witch is distorted, guitar-oriented heavy metal of the highest order, filled with memorable songs accentuated by Kevin Heybourne's divine vocals. It is a little sloppy here and there, but the music never suffers from it. This record exudes passion, intensity, and a raw energy that seemed characteristic of the New Wave of British Heavy Metal. Since they fell to pieces so quickly after their first album, Angel Witch has never really received the consideration they deserve for it, undoubtedly one of the strongest debuts of any metal band. Songs like "Angel Witch," "White Witch," and "Sorcerers" alone are worth the listen, but this whole album is a wonderful experience.