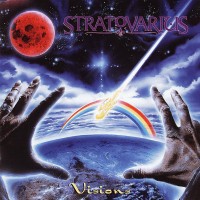 
In tribute to their nth top quality release, the techno-like Nemesis, I decided to return to the album that made me love Stratovarius, the masterpiece: Visions.

Already quite famous, thanks to the good Episode, the Finnish fivesome improved every aspect of their music: technically, emotionally and on the songwriting level. This album contains many of the songs which became Stratovarius classics, and I relate this with the perfect synergy between the two virtuosos of the band: the ex-genius (sob) Timo Tolkki and Jens Johansson, one of the best - maybe the best - keyboardists ever in the history of power metal. They do not simply work as single elements, but as parts of the same organism: together with some charming intros - see Jens' harpsichord in "Black Diamond" or Timo's killer riff in "Legions" - the two unite themselves in continuous chases during the solos, a Stratovarius trademark that has been imitated, often unsuccessfully, by many bands.

Then comes to mind the other Timo: Kotipelto is nothing but a god. His timeless voice, damn high and authoritative, brings "fifty shades of ice" to the band's music, from the melancholy in "Before The Winter" to the typical power metal bravery in "Forever Free", never sounding plain. The astonishing fact is that now, sixteen years later, he's exactly the same.

Listening to the instrumental "Holy Light" allows one to appreciate also the galloping drums and the rhythmic bass, which fit in every song whether fast, slow or mid-tempo like the majestic opener "The Kiss Of Judas".

Concerning the songwriting, this album shows a clear improvement, as previously stated. The band is at ease with every kind of song, and this is one of the greatest ups in Visions. In fact, it contains so many different types of tracks that it's possible to pass in a few minutes from simple classics as "Paradise" to intricate suites like the title track, and this prevents boredom to the listener. To conclude, the production is stunningly good, considered the year 1997.

I had ready two little low points for this album, but they decreased to one. The first, in fact, should have been that Visions, in all its greatness, is limited to only one genre. Then I remembered that it's exactly this album that has been the model for every band hereafter. This is among the patriarchs of power metal, innovative in sound, style and meaningful lyrics. The only thumbs down that remains is: it ends.