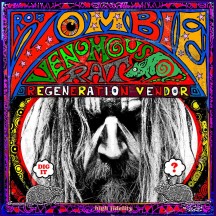 
Rob Zombie is back! Well, about as back as Mr. Zombie can probably get anyway. This is definitely his best work since Hellbilly Deluxe: 13 Tales Of Cadaverous Cavorting Inside The Spookshow International; no, the full title was not necessary but I've always loved it and included it because I could, damn it!

I've been trying to put my finger on why this album sounds like classic Zombie despite not sounding entirely like Hellbilly Deluxe. It has elements of Hellbilly Deluxe here and there but not wholly, and it definitely sounds like classic Zombie. After a revelation in the car on the way to work one morning, I finally figured out why...it's classic White Zombie! From the main style/sound to the artwork, to even the album and song titles, and lyrics, it's classic White Zombie! This is the kind of album that probably would have come after Astro Creep 2000, if Rob hadn't gone solo.

Hellbilly Deluxe was my introduction to metal, my gateway drug so to speak, so that album has a very special place in my heart and always will. Ever since the release of Educated Horses, and being disappointed by the realization that there will never be another album like Hellbilly Deluxe, I've come to the conclusion that that first Rob Zombie solo output was just a fluke and will never happen again. I enjoyed The Sinister Urge, but cared not for Educated Horses, and Hellbilly Deluxe 2 felt like grasping. But with the release of Venomous Rat Regeneration Vendor, I have a renewed faith in Rob Zombie's ability to create good, quality music again; even if it's not of the same style as Hellbilly Deluxe.

After becoming a die-hard Rob Zombie fan back in '99, I also checked out his old band, White Zombie, and became a big fan of the La Sexorcisto and Astro Creep: 2000 albums as well. This album is packed full of that classic White Zombie groove and psychedelic-y sound (including the great sound bites!) that was so ever present in those old White Zombie tunes. He even returns to his gritty, southern drawl (where I always figured he probably got the term "Hellbilly" from) with lyrical themes regarding such things as the macabre, pussy, driving fast, rockin' n' rollin', and makin' shit up (dafuq is "Geng Gang Gong De Do Gong De Laga Raga" supposed to mean?! Lol!). They have also included a pretty good cover of "We're An American Band" by Grand Funk Railroad with their own bit of style to it, like a proper cover should be.

If you've been longing for that glorious return of Mr. Rob Zombie and his Spookshow International, then get over it cuz it's not going to happen. However, if you've ever found yourself thinking, "I bet it would be cool if White Zombie got back together and wrote a new album", then get this album ASAP!