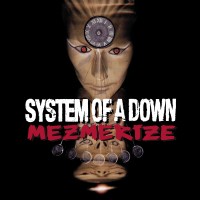 
When a band releases two albums in the same year, I always have the feeling that they had the material to release one good album, and released two just for business reasons, recording some fillers to reach the required playing time.

Luckily, System Of A Down didn't follow this trend in 2005 when they released, over a period of 6 months, their 4th and 5th albums, Mezmerize and Hypnotize, recording them in the same time frame. Since oddities are surely not new to the Armenian guys, the two album titles are exactly synonyms, and the two album artworks clearly relate to each other. This is, quite obviously, reflected in the music: Hypnotize ends up being a coherent follow-up.

Mezmerize shows to be the stronger of two but, more importantly, the stronger of the band's whole discography. Despite having maintained those genetic features that made System Of A Down one of the most world famous metal bands, the foursome evolved their style exactly in the part that was mainly considered their strength point: the vocals. In fact, if from their self-titled debut to Steal This Album! the band's eclectic mastermind Serj Tankian provided all the vocal performances, this time he shared the role with guitarist Daron Malakian.

The latter shows an unexpected talent and his vocal timbre, so different from Serj's, offers this album a dynamism which allows the listener to replay every song several times, and always discover a new, intricate side of the track. This is also because of the traditional System Of A Down characteristics, like their usual mad but at the same time clear and reasoned insanity or the skillful guitarwork, with more than one interesting riff per song - take as example the variations in "B.Y.O.B."

The whole album slips away way too quickly, due to the playing time of around 40 minutes which characterizes every work of these Armenian metallers, but the replay button soon becomes a loyal friend, thanks to both the expert and innovative songwriting and to the wise alternation between fast, catchy - and often deranged - crushers and slow, melancholic ballads.

Some may despise this album just due to the usual metalhead's shortsightedness of hating everything that's becoming mainstream, and some may not worship System Of A Down because they understand the need to take a break from this inhuman madness. I belong to the second party.

Mezmerize is undoubtedly a great album that needs to be tasted in small doses, never getting old or boring. Just like a good booze.

Written on 10.05.2013 by
R Lewis
Hopefully you won't agree with me, diversity of opinions is what makes metal so beautiful and varied.