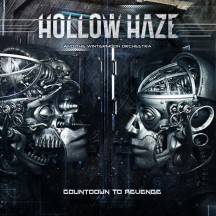 
For a not well-known band, hiring a famous vocalist is always an important career booster, often independent from the quality of the album that gets released. Then, if the singer is renowned Fabio Lione (Rhapsody Of Fire, Vision Divine) and the output of the combo is solid and enjoyable, even better.

"The heaviest and darkest Hollow Haze chapter has begun," is what the band stated at the beginning of their experience with Fabio, who replaced long-time singer Ramon Sonato. And this promise has totally been upheld: Countdown To Revenge is an obscure, aggressive and powerful album.

The concept deals externally with a science fiction, which is used to explore the secrets of the transcendent and, more deeply, the various facets of human nature.

This album's taste is way more intricate than what one usually thinks of "melodic metal": Hollow Haze wisely stir elements of heavy and power, spicing them with a progressive touch. The result is served with the collaboration of the Wintermoon Orchestra: the contrast between heavy riffs and majestic orchestrations makes this a multi-layered release, with various kind of tracks, stamping out the risk of getting bored.

In fact, one of the biggest ups of Countdown To Revenge is the fact that it doesn't suffer the usual flaw of having two or three masterpieces lost in a sea of fillers, but conversely it is a coherent flow of good songs, each of which could easily be the opener without surprising the listener. Plus, the real gem of the album comes at its end, being the magical 8-minute epic title track, which displays both clean singing and screaming, just to explode aurally.

Fabio Lione's performance deserves a special mention: he had to replace one of the most talented young Italian singers, and this test was by no means easy, even for an expert vocalist accustomed to pressures as he is, but in this "debut" with Hollow Haze he delivers great singing. But don't snort, Rhapsody Of Fire haters: Fabio shows once again his extraordinary talent while exploring a completely different kind of singing, definitely more aggressive and scratchy than the one with which fans have become accustomed for almost 20 years.

Despite the fact that many producers should go back to the good old 70's prog rock - to name a band, Yes - to relearn the fact that the bass guitar is a fundamental instrument, here this blemish is not predominant. The bass is clearly noticeable, and the production can be considered overall really satisfying, offering a deep and intense sound.

Hollow Haze is formed by young and extremely productive musicians. With the enthusiasm shown in this release and the experience earned throughout the years, thanks also to excellent supporting tours (Tarja, to name one), they can achieve every goal to which they set themselves. Now, it's their turn.

Written on 14.07.2013 by
R Lewis
Hopefully you won't agree with me, diversity of opinions is what makes metal so beautiful and varied.