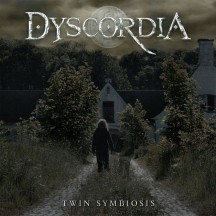 
Belgium's Dyscordia put an individual melodic spin into their progressive metal and they really know how to establish efficiently flowing tunes. There is a tendency throughout their debut album to perform a stylistically versatile mix which propels particularly catchy choruses and sweet soloing. They are adept at making complex borrowings from a range of melodic genres and creating smoothly flowing tunes, and a well structured album is the result.

A range of tastes are likely to be satisfied by this with elements of progressive, power, and melodic death being found in their approach and all is ably performed by the six ambitious musicians involved.

The rhythm is swift and consistent and leaves little room for disinterest aside from the general inclination to keep to a fixed tempo. This will become particularly obvious by the time you reach the climactic drive of the final track "My Devotion" with its broader scope which is a spectacular way to bring things to a close. The dependable beat builds up to this reward and it finalises the album nicely as it returns full circle to the sound expressed in the introductory "Dreamcatcher Tree."

The vocal arrangement upholds the album's concept; you have the twin cleans and growls which are by no means identical but born of the same circumstance and offer mutual benefits. The former are especially varied and the growls are utilised effectively as a duelling contrast to the prevailing presence of these changing cleans.

A drawback is the lack of variation in the rhythm section which leaves the melodic focus wanting in its need for further dynamism. It's not overly complex and while some of the songs are more distinctive than others it takes moments such as the intros of "Ache Of Hearts" and the title track, the nimble guitar shred of "From Sight To Black" and the memorable vocal lines to elevate the album.

Nevertheless Twin Symbiosis is a creative mix of melodic styles and Dyscordia have begun to establish their potentially widely appealing style with a promising first effort.