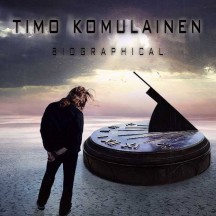 
Sometimes you feel that you've listened to everything there was to listen to; that you have become able to predict an album's sound just by looking at its cover artwork and track listing; that you can no longer be surprised by anything. But then are those moments in which some artists, such as Timo Komulainen, force you to change your mind.

Biographical is an unusual album. Its creator stated it is an album, which, both lyrically and musically, reflects his life. While writing the lyrical side is quite intuitive, my first question was, how do you translate a human life into music? Basically, this album sounds like an ideal life; peaceful at the beginning and at the end, respectively with "I" and "Love", but full of all the madness of this world in the middle. And when I talk about madness, it literally is. Biographical presents us with a very wide range of tracks; each of them intriguing and unpredictable. But what is exactly the album's sound?

Timo Komulainen mainly belongs into the extreme metal scene. Mixing Opeth like compositions, sick vocals that remind us of Wintersun's mastermind Jari Mäenpää, and sometimes bits of Devin Townsend. Nevertheless, Timo puts his stamp on his own personal style, recognizable all over the album, but never repetitive.

The musical arrangements are fitting to the album's atmosphere and are technical enough, but while chatting with Timo, I asked him who were his session musicians, and he revealed that the only "real" instruments on the album were his own vocals. Everything else, including guitars and solos, was done with synths and samplers. (Korn, please take note: this album is proof that composing enjoyable music electronically is actually possible.)

Despite the fact that this is the first album released officially under the Timo Komulainen moniker, the guy is not a rookie. He already released two albums, Antediluvian Hunger under the name of Viral and Omniavatar's United Earth, unfortunately both unsuccessful, so we ask ourselves, why should Biographical change this trend?

Well, mainly because Biographical is Timo's less extreme work to date, the one which most distances its sound from the original melodic death metal ilk, through the additions of orchestral and atmospheric touches. Or maybe, because this is an effort which, though being ambitious, doesn't fall in the self-glorification of which his first two albums were criticized on. I wouldn't be surprised if Biographical turns out being the album that establishes Timo Komulainen as a progressive metal reality. Time will tell.

Written on 01.10.2013 by
R Lewis
Hopefully you won't agree with me, diversity of opinions is what makes metal so beautiful and varied.