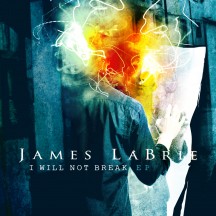 
Much has already been said about James LaBrie's solo work: it has been praised for not being a sterile Dream Theater imitation, while it has been picked apart for its proximity to pop melodies. This EP surely won't appease this debate.

First of all, I'd like to warn you about the fact that I Will Not Break does not contain brand new music. Let's make a brief census: of the nine pieces of music in here, the title track and the two following songs are, respectively, the closer and two bonuses from last year's Impermanent Resonance, and from track 4 to 6 we have an alternate mix and two demos of some of the best songs off the successful Static Impulse, while the EP is closed by three remixed tracks off the same 2010 album. This said, you should already know if you're still interested in reading this.

So, is this EP of any interest? Sure it is. Despite not offering new music as we usually mean it, I Will Not Break paves the way to some brief considerations.

The first is that James LaBrie isn't lacking ideas, since leaving two top quality songs as "Unraveling" and "Why" as bonus tracks is a move that tells a lot about the consideration that the American artist has of his solo work. While bonuses often fall into being cheap covers recorded simply to justify the release of a Digipack version, this time those two songs could easily have been the openers to both Static Impulse and Impermanent Resonance.

The second is that all the musicians that work on these records are really talented, as keyboardist Matt Guillory, who provides vocals in the "Jekyll Or Hyde" and "Just Watch Me" demos, could easily carry on his own shoulders all of the singing. His voice, so different from that of the Dream Theater's vocalist, also helps the listener to have a different insight on how the process of creating songs goes on.

The third and last is that LaBrie definitely has balls. Offering dubstep remixes of some fan-favorite tracks can be considered anything but playing it safe, and can easily turn out in a complete suicide. But the aforementioned affinity of this music with today's commercial tunes, and the objective talent of the three DJ's that worked on the songs, make these experiments a complete success. This also shows how dubstep techniques, if used on decent material, have their undeniable potential.

I Will Not Break is likely to be controversial: some will say it was useless, some that it's shit. I say that it is a welcome addition to LaBrie's discography that, like it or not, is now a force in the melodic metal scene. Deal with it.

Written on 25.01.2014 by
R Lewis
Hopefully you won't agree with me, diversity of opinions is what makes metal so beautiful and varied.