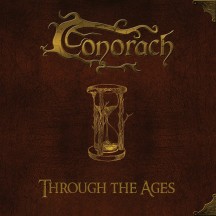 
Six long years after their debut, Tales From The Tavern, the Dutch band Conorach make their comeback with their sophomore album, Through The Ages.

Few album titles were ever more appropriate than this one, as Conorach play that classic kind of medieval-esque power metal that considers taking the listener back in years, between knights and barrels of ale, its main goal. A goal that has been achieved, as the atmosphere of this album is credible and captivating, thanks not to intrusive, unnecessary orchestrations or sickening narrations of heroic deeds, but to the overall sound of the whole, the cohesion between the band's members and a certain songwriting airiness.

Conorach's power metal is straightforward and rough enough not to disgust the genre haters. Jacco de Wijs' unexpectedly "human" voice - meaning that it feels like a common human singing, not some scarily high-pitched mermaid or the likes of it - and a production that, compared to their 2008 album, wisely pushes keys into the back to give more space to the guitars, therefore granting the whole album a more concrete sound.

However, it's mainly de Wijs' vocal work that gives the album its personal soul, since the musicianship, though not being uninspired, draws a lot from the genre's heavyweights, or from Iron Maiden regarding several typical Maiden'ish harmonies in the beginning of some tracks, and maybe lacks memorable hooks. What Through The Ages probably misses, is a "When The Lights Are Down", an "Emerald Sword" or an "Eagleheart": a track that fans find themselves humming over and over again. The opener "Finest Hour", which has also been the song chosen for their video, tries to do the job, but achieves it only in part.

Through The Ages is a good power metal release, enriched by some folk and progressive touches here and there, but it's not the album that will allow the band filling the gap with the genre's biggest acts. But considering what an improvement this has been from 2008's Tales From The Tavern, it seems like the guys in Conorach could still have something important to say. Don't expect your new AOTY, but Conorach's latest is definitely worth a shot.

Check their music on Bandcamp.

Written on 02.06.2014 by
R Lewis
Hopefully you won't agree with me, diversity of opinions is what makes metal so beautiful and varied.