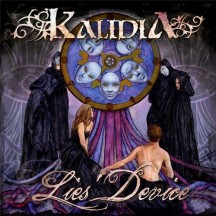 
Hailing from Italy, where a long tradition of power metal bands creates stiff competition for newcomers, Kalidia introduce themselves with a rough yet respectable debut.

Lies' Device boasts only a handful of memorable songs, while the rest blend into a haze of synth-heavy filler. The songwriting aims to craft a competent, listenable album rather than to show off a couple of catchy scene-stealers. Obviously this kind of music has been done many times before, but Kalidia avoid being overly generic. Some excellent guitar solos and interesting keyboard work aid these songs in getting off the ground. Guest vocals provided by Andrea Racco of Etherna and Opening Scenery make "Harbinger Of Serenity" one of the most interesting tracks on the album; Alessandro Lucatti, also of Etherna, provides guitar work for "In Black And White," another standout.

Nicoletta Rosellini sounds as though she is not entirely comfortable with being a lead singer; at least, not for a power metal band. While clean female vocals and flower metal are a tried-and-true combination, Rosellini lacks the kind of dynamism and energy required to pull it off. Her voice is by no means unpleasant to listen to, but her dreamy, rather soft-spoken delivery sounds better suited to a more passive form of music.

The mixing steps on the band's toes from time to time, with guitars sometimes being buried under the keyboards and the vocals struggling for prominence. The results can be unfortunately tame-sounding, and the occasionally muddied rhythm section doesn't help.

Lies' Device suffers from uneven songwriting, drowsy production, and some unconvincing performances. It definitely bears the mark of a first effort, but Kalidia have started out with more reason to be proud than ashamed. Perhaps Lies' Device won't win Power Metal Album of the Year in our Metal Storm Awards 2014, but it will impress those looking for new entries into the pages of power metal history.