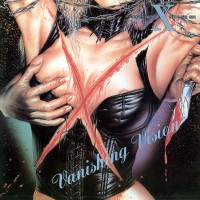 
As anyone who saw Sam Dunn's documentary "Global Metal" may know, X Japan, or X as they were then called, were treated as pariahs by the Japanese music establishment when they first emerged in the mid-1980s. Rumour has it some Tokyo bars even hung signs on their doors saying "No Yoshiki". This outsider status wasn't entirely unearned; they openly courted controversy with the sleeve of debut single I'll Kill You, which featured the faces of corpses photographed during the Vietnam War.

Their time as outsiders didn't last long, however. With Vanishing Vision, the band's second and final release on Yoshiki's own Extasy Records label, X Japan kicked open the doors that'd previously been bolted shut to them.

After a subdued instrumental intro, the album plunges straight in at the heavy end with the terrific "Vanishing Love", 6 minutes of honest-to-Moses speed metal. Heavy tracks dominate the opening two-thirds of the record, the only exception being "Give Me The Pleasure", the first instance of what became a hallmark of X Japan's albums; an odd, sometimes outright bizarre instrumental interlude, usually placed at the halfway point. In this case, we have Yoshiki putting on a demonic voice and reading a monologue whilst the band jams along to Taiji's slapped bassline.

At just 43 minutes, Vanishing Vision is uncharacteristically short for an X Japan album, more than likely due to the constraints of the 12-inch vinyl format. Nevertheless, this restrictive canvas didn't prevent the guys from including two of their trademark - some might even say obligatory - ballads. The first, the sprawling 9-minute "Alive", is an unusually muddled affair by Yoshiki's standards. The far tighter "Kurenai", another of album's highlight, makes up some of the lost ground, and Vanishing Vision ends on a high (or at least it should've done).

Instead, by way of an outro, we get "Unfinished"; a would-be ballad that cuts out after just 90 seconds. Whether it was due to limited vinyl space, a lack of studio time, a sudden power cut, or just Yoshiki and friends taking the piss, we'll probably never know.

Those looking for a definitive introduction to X Japan might want to skip ahead to Blue Blood before attempting Vanishing Vision, lest any of the more underwhelming tracks put you off going further. Not that this is one for fanboys and completists only - it's just not quite as good as the follow-up.

Still, despite its imperfections, this was, is and remains a very promising debut.