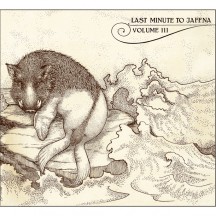 
Metal awash with the down-tempo depressions of slowcore; this is Last Minute To Jaffna's relaxing rebuke to unoriginality. The resulting sound in Volume III is hypnotic and psychedelic, breathed into life with Italian acoustic. For a post-metal album, it's an unusual experience.

There is an ease of linearity in the direction this record takes, a simplicity and flow in the approach which belies the distinctive hybrid of a shuffling tempo in the downcast alternative rock, with metallic tones enmeshed within its surface textures. The infusion of brass instrumentation in "Chapter XIII" emerges charismatically to the surface and provides an equally identifiable distinction alongside the continual acoustic.

The psychedelic components which are consistently at play in the background here have lambency to them that slowly shimmers thanks to sufficient production as the music is directed by metallic guitar lines, the gentle yet dense press of drums providing constancy to the rhythmic qualities of the experience.

The vocal delivery is often an unfortunate discomfort in the warm bed generated by the effective instrumentation. The arrangements do perpetuate the generally laid-back style in a performance which clearly aims for the psychedelic, yet fail to deliver upon what is offered by the accompanying instruments, which are used to construct rather long durations of a persistent kind of sound characterised by the grain of acoustic. There is little deviation from the style set from the album's opening, and by the conclusion in the live rendition of the track entitled "Chapter XI," the material fades quickly from memory.

Having said that, each track offers slight variation to the style as they play, particularly where the brass instrumentation is involved, and in a post-metal fashion they each possess their own climactic build-ups and culminating crescendos, even if their heaviness neither ascends nor descends but remains at a constant weighted tone.

Volume III is the band's second full length recording and demonstrates further experimentations in psychedelia, which are evidently still in the process of development, offering an experience more intriguing than memorable.