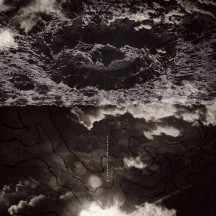 
As We Draw create heightened hardcore tension in post-metal.

The general rate of song progression leaves the listener in a constant state of paranoia due to the noisily harnessed hardcore element. Suitably, paranoia is also a thematic element for the album. Previously instated on their debut, entitled Lines Breaking Circles, as a melodic post-hardcore band with sludge undertones, this French trio's second full-length studio effort in Mirages is at the brink of their initial sub-genre, as its metallization effectively and dynamically pushes the sound further within the confines of an atmospheric sludge. Yet the structure of the record is determined by a hardcore centred mindset; as all but one of the tracks are designed according to a more immediate and short durational impact more befitting a post-hardcore record.

Sludge, and thus its recognisably atmospheric variant, inherently exhibits hardcore elements, but not to this extent. Not to this level of emphasis, as the band manage to convey themselves in a tersely and atypically structured arrangement of compositions characterised by a chaotically generated atmosphere which is remarkably audibly representative of its thematic aims. "The Window" serves as but a more expansive opening, it demonstrating best the album's post-metallic textures exemplified in noisily rendered and jarring application of atmospheric sludge, and is a ten minute onset from which the remainder of the album proceeds with a rather variable framework.

Ambitiously, this post-hardcore outfit have set out from this area of music with a purpose; to experiment at the fringes of their own sound and more fully elaborate upon the metallic textures hitherto utilised as a secondary and supportive element. Bands of this nature, that is those operating between post-hardcore and metal are typically associated with and influenced by notables such as Converge, to which the style of As We Draw are never fully dominated or directly identifiable as they venture here into post-metal. This is achieved via their navigation through a rather oppressive and densely noise founded sound, and one which enables a rhythm section which constructs the set course with an obvious merging of the two discernible styles here; heavily sludge oriented post-metal, and its hardcore deliverance. In other words, the post-metal and its tones here often play off the integral element of hardcore. However, there are segments more readily defined by sludge guitar tones and distortions more clearly reminiscent of Cult Of Luna, with hardcore falling in as the supportive element. Primarily though, hardcore drives this record on.

Far from being an expected Convergence of hardcore and post-metal, not only do these two elements meet at a point, but they are continually fused as one. It's essentially a re-emphasising of the hardcore element in post-metal, with atmospheric sludge as its trajectory, and hardcore turmoil, most clearly expressed vocally and percussively, as its imperative through said trajectory.

One of the fundamental aspects of post-metal is well established here. That inexorable contrast between the cacophonously heavy and the experientially temporary alleviation of lighter passages, all projected here with an ongoing sense of mental struggle; frequently discordant guitar patterns build upon themselves in confined spaces concisely delivered, not overtly borrowing from post-rock song structures, yet managing similarly effective crescendos despite the more concise arrangements. Between these the more atmospheric segments can be found interspersed, such as "Acceptance," and even at this point we find distortion as its central metallic line. "Limbo" is an all encompassing darkness and loss of the album's consciousness. As a finalising absorption, its droning qualities sever the much noisier experience to which the listener was previously subjected and ends the album at its most immersive, an aspect which is, in purpose and intent, comparable to the conclusion of Rosetta's latest effort.

Variance isn't an issue for this album. If anything it never sits still, continually reshaping itself in a way that gives valid reasons for the choice of the record's title. Few of the tracks will be recalled for their distinctiveness, exceptions being the likes of "Fata Bromosa," which represents the album at its most melodically tangible rendered in cacophony. This is a post-metal album, and not one composed of singles. Each of the album's pieces serves to construct what is very much an "album experience," and therefore one which is best heard in its entirety and as one ongoing sequence. For this purpose, the transitions are well founded and allow the tracks to segue clearly from one to the next.

Mirages isn't the kind of record which will immediately strike listeners as something entirely new, because it's essentially a reaffirmation of an element already found in atmospheric sludge; hardcore. Though the degree to which As We Draw create such within this context is surprisingly experimental in nature, and quite original.