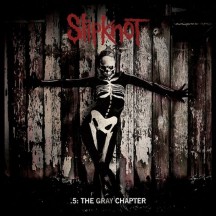 
Last time Slipknot released a studio album, they still served as one of my primary conduits to the metal scene. As I am no longer 14, Slipknot's angst-and-unorthodox-percussion-heavy brand of nu/alt metal lacks the same gravitas it once had, but I still enjoy Vol 3: The Subliminal Verses and Slipknot from time to time. You might call me a bit of a lapsed fan, but I'm enough of one to give .5: The Gray Chapter a fighting chance.

"XIX" opens the album to a surprisingly auspicious start, a haunting, ragged dirge with a background of mysterious drones and samples that sounds like Johnny Hobo about to kill himself - reminiscent of "Prelude 3.0," but darker and stronger. Based on several of the previously-released songs, Slipknot obviously have other plans for the rest of the album, and while something like "The Negative One" certainly adheres to nu metal conventions even more rigidly than Slipknot's own past material, "XIX" demonstrates a capacity for much greater maturity and complexity in their songwriting. The surprising turn for Slipknot lasts only so far as the first minute of the next song, at which point the familiar face emerges. Vibrant and conversant percussion fill in the underbelly of the song, lounging next to the ichorous guitars; overtop, Corey Taylor alternates between raw screams and haunted cleans. The usual, though with more blastbeats than I recall.

The scene of popular metal has evolved in the time since Slipknot's last bout of relevance, but they have kept up with the kids; .5: The Gray Chapter features some of Slipknot's fastest and most aggressive songs to date. Of course, there are also the characteristic moments of brooding murkiness, but as a whole Slipknot give the impression that they have undergone some manner of stylistic growth. This album emphasizes atmosphere and melody a lot more than previous efforts, with more prominent bass than ever before, occasional clean backing vocals, and a great deal more attention paid to the songs' backdrops. "Lech" and "Custer" still lack much to offer outside the realms of profound and sometimes cringe-worthy boredom, but "The Devil In I" and "The Negative One" benefit extraordinarily from being placed in the context of the album, and "Goodbye" continues the more thoughtful approach to songwriting of "XIX." Overall, this album sounds like a welcome blend of Slipknot's strongest Iowa and Vol 3 material with some new tactics and an increased musical awareness. Sure, Slipknot was never a one-trick pony, and they frequently mixed up their song templates and moods, but this time around feels as though they have progressed.

Even at the time of its release I found that All Hope Is Gone leaves something to be desired; I felt both that Slipknot had lost their distinguishing characteristics and the juvenile histrionics game was getting played-out. I expected very little from .5: The Gray Chapter, but it has proved itself to be a strong release, and might even win over some less-enthused observers. It appears that Slipknot are a more versatile and resilient band than I had anticipated.