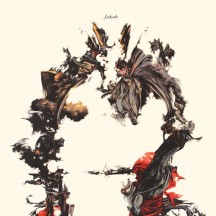 
8 years is a hell of a long time between releases, and New Zealand's instrumental post rock/metal band Jakob have pulled off a miraculous comeback. I don't think the band was ever on the brink of dissipating, but the fact is life altering occurrences left many in doubt. Freak injuries to all the band members' hands, public relation snafus and what seemed an insurmountable layoff put the band and their highly anticipated album Sines in between a rock and a hard place. Alas, post-fans will be excited to know Jakob sound mightier than ever, like the band I discovered while they were touring with Isis in 2008.

Sines is Jakob's best album to date because of its kinetic and aggressive style. The band have refined and refocused their dialect, going for more texture rather than tone. There isn't much repetitive, monotonous and over-used chord progression, instead the strength of its delivery is using a unique and enigmatic style along with post rock/metal dynamic precision. With many of the songs riding the wave of dramatic build up and explosive climax, the songs feel a bit more dense. Thick bass and slow-burning spacey atmosphere generate a heavy and lumbering decal. Echo, delay, reverb and pedals amplify harmonic layered guitar work and selective orchestral strings. This is by far the most memorable part and signature sound on Sines. Finally, electronics and programming are at the inessential end of the spectrum, making it all the more amazing how these three men can create such an emotional and transcendental opus by basically using bass, guitar and drum. Fantastic production and perfect song lengths scale harsh, minimalistic soundscapes down to its core.

Sines is calm and meditative and full of energy and vim all at the same time. Expanding the limitations for what music of this style is, the premise of album does exactly what it sets out to do: Employ concise and focused post rock/metal schematics hell bent on delivering the highest impact of feelings and intensity. It is quite accessible for newcomers of the genre but may require a lot of listens to fully understand its titillation. I never thought anything could challenge Pet Slimmers Of The Year's Fragments Of Uniforms for best instrumental album of 2014, but Jakob have announced with authority that they are back, and better than before. They have renovated, reinvented and progressed their own signature sound into the highest caliber of instrumental post rock/metal, and have earned my utmost respect for their tenacity and dedication.