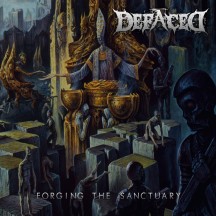 
I almost always pick tank/demolition characters when I play. I am obsessed with giant robots and heavy machinery. I have a problem with heavy shit in general and I keep seeing that manifest itself in my taste in death metal just as well.

I basically gave it all away in the intro. Defaced are a Swiss deformation whose job is to make holes in stuff, period. I could go on with cheesy Switzerland-themed jokes but I can't be neutral - that's another one, sorry - when it comes to well-made modern death metal that resembles a less deranged Benighted, and a more varied Panzerchrist. As much as I don't mind my death metal to be stupidly brutal, these ladies actually display a good enough sense of dynamism and some intelligence in songwriting - even if they don't break any traditions either. Not too noodley, but just enough to deliver decent solos and catchy riffs, these guys excel in intro hooks so simple and catchy I almost feel guilty for liking them so much. Now that you're starting to get the picture, I'm sure you can already hear the dual vocals whence you are: Bo Summer-like super deep growls bordering on piggy squeals in the up-tempo passages, combined with black-metalish bitch shrieks.

Forging The Sanctuary being the second full length released by the disfigured quintet, it should be noted that every aspect of their music has been upgraded a notch: from the nice Dan Seagrave cover, to the now more precise production; from the level of violence to the general catchiness of the opus. All in all, Defaced just signed an unoriginal, but killer fifty minute piece that might make the pains in the ass elitists whine, but will amply satisfy most of us.

Get a large complimentary slice of Swiss putridity that will demolish your palate, right here.