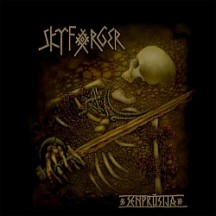 
To be honest I had some reservations reviewing a folk black metal band. Given that the closest I get to either genres is Bathory one can understand my trepidation. Then to my surprise it turns out Skyforger's new album Sensprūsija offers a more multifaceted approach including large chunks of heavy and thrash metal circa 1988!

The metal world needs more catchy metal and Skyforger certainly deliver on Sensprūsija. And in true Bathory style they don't pretty up the delivery just cause they're catchy and occasionally melodic and even at epic at times.

The riffs are the big drawcard on this album. They're meaty, catchy and full of tasty hooks. And whilst the style is firmly rooted in the 1980s a lot of the time, it's certainly not cheesy or nostalgic. Indeed the thick tones and raw edge give these classic riffs new life. Mix in a few black metal style riffs and you've got a veritable smorgasbord of heavy metal riff mastery. Backing up the guitars is a deliciously dirty huge rumbling bass sound that would make Venom's Cronos proud.

The vocalist Peter Kvetkovskis does a great job at being Latvia's answer to Skyclad's phenomenal Martin Walkyier. Though unfortunately the lyrical impact is lost for non-Latvian speakers, who might like to know what they're singing along to those group shouts in "Herkus Monte." The occasional clean vocals are folky style chants but overall the vocals don't veer too far away from the memorable Walkyier-esque snarls complete with dripping venom.

The folk elements are surprisingly few. Occasionally there's some flutes, acoustic guitars or folk style chanting present but overall the album is pure thrash meets heavy meets melodic black metal meets occasional early melodic death metal. Folk elements are only really a major element for the big sounding "Ramava" whose chunky monstrous riff is a definite highlight or "Zem Lieutvas Karogiem" whose latter half morphs from full on thrash to folk metal. Same can be said for the black metal components which seem to be confined to the odd tremolo riff and overall guitar texture.

The song writing is top notch. The songs are memorable and even catchy but don't compromise on metal intensity unlike so many other folk inclined metal bands. Highlights include the folky and huge sounding "Ramava," the rumbling freight train that is "Tagad Vai Nekad" and the at times fist pumping title track. But there aren't any truly bad songs here.

On the negative, some of those tremolo riffs seem a bit samey. Taken as part of individual songs they're ok, but in the context of an album they can get a bit repetitive.

Skyforger's Sensprūsija is a great example of making old riffs sound new. It's catchy and accessible whilst retaining that rawness and ugliness that marks out some of metal's most classic albums. It is a great example of transcending genre boundaries to come up with an engaging, varied and most importantly enjoyable listening experience.