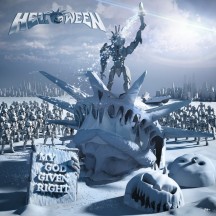 
All-told, I guess I can count myself pretty darn fortunate to have gotten my hands on the new Helloween prior to its release, so I could dribble out a few choice zingers on the internet for total strangers to read as if I know something they don't (even if I wound up sitting on my adipose sarcophagus watching Parks & Rec all day and had to wait until after the release date to listen to it like a regular chump-asaurus). I just wish this had happened two, five, or possibly 28 years ago.

It's by no means a disaster on the level of a certain 2004 Roland Emmerich film (which will remain nameless and stupid) from which the cover art takes inspiration, but watching My God-Given Right waltz down the red carpet in the wake of Straight Out Of Hell, 7 Sinners, Gambling With The Devil, etc. requires a period of adjustment. It becomes easier to process after adequate fermentation, like most albums, but something about this still feels threadbare and disappointing. My first taste of the album came from the strangely-cheery "Battle's Won," which strikes me as the most lukewarm and inoffensive single Helloween has had in years. The song came so close to success, too; that perfectly uncomfortable chord on which "all foes defeated, done" and "victor to the core" land ferociously curb-stomps any chances this song had of growing on me. The great bluegrass guitarist and luthier Wayne Henderson once said, "There's no such thing as a bad note. But that there was a bad selection of notes."

Helloween can usually be compared to a cheeseburger. The Deris-era maturity, seasoned artfully with darkness and a powerful bite, serves as the succulent beef; the humor, the friendlier and more intentional light-heartedness, forms the bun. The cheese is the cheese. Typical Helloween albums strike an adequate balance between the three and wind up being delicious. My God-Given Right largely forgoes the interesting part and leaves you with a soggy bit of bread and melted cheese all over your hands, trying to feel around under the table for the actual burger before the dog gets it while also trying not to get cheese everywhere. In layman's terms, its bark is worse than its bite; it lacks a truly powerful and impressive something that Helloween can so often lay down. Its best moments are comparable to the weaker songs from the last several albums, while at worst it scrapes an all-too-familiar barrel of hard rock/power pop/flowery accentuations.

The key to enjoying My God-Given Right is properly negotiating the nature of the album you're getting. I've had half of Straight Out Of Hell and the original Keeper duology on heavy rotation these last few weeks - not in preparation for this, but by pure happenstance - and that definitely colored my reception in a somewhat more negative fashion. My God-Given Right sounds tamer and warmer, embracing the less adventurous aspects while shying away from anything too violent, explosive, or magnificent. Songs like "Lost In America," "Claws," and the bombastic finisher "You, Still Of War" definitely save the album from a life of mediocrity, but it won't soon be remembered in the same breath as its predecessors.