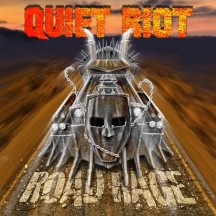 
I remember when Quiet Riot was a gaudy spandex sweat stain of a glam band waving in the toxic breeze of the Sunset Strip, earning its weekly paycheck by riding on the dwindling coattails of Randy Rhoads's brief captaincy and fortuitously hacked-up versions of great songs from a better band. How I long for those days.

To be more specific, I don't remember that, as I happened not to be alive at that point in history, but I do still remember Quiet Riot before this dumpster fire belched forth from a widening crack in the asphalt somewhere between Los Angeles and Babylon. I was beginning to wonder where I would find my least favorite album of the year, and I suspect I may have found it in Road Rage, an eerie reminder of how cruel time has been to the bloated carcasses of hair metal bands that may still be found poking through the trash heaps and pawn shops of the underground music scene. If there is one class of metal band that can still be labeled sadder than geriatric NWOBHM middleweights crawling back for a low-volume, 20-year-late comeback nobody asked for, it's these destabilizing glam guys who don't realize that the road ran out and the party ended back in the early '90s, but I guess Snakes N' Barrels has to be a parody of something.

I don't know what part of this album was supposed to impress me, but the talented Frankie Banali seems to have slept through Road Rage, and all the other members worth listening to have long since departed or died. While even the Quiet Riot of the mid-'80s could be expected to produce at least one decent song per release, the best this album gets is certain parts of a few songs; nothing is great all the way through. Give a 10-year-old a guitar and two minutes to write a hard rock song and you'll find a similar level of artistic insight. The demo-quality production is only the icing on the shark sandwich. The vocals sit on top of the instruments, which, for their part, are sickeningly muffled, and the assembled elements blend barely or not at all. The production quality is absolutely abysmal, garage-level abysmal; it only furthers the image of a band too frazzled and/or behind the times to deliver on the level of party that it promises. If at any point I find a song getting a little too catchy or inspired, I can always count on the razor-thin sound, suffocatingly mundane solos, and occasionally flat vocals to drag me back into reality.

The band's new vocalist, James Durbin, is a former contestant on American Idol, placing fourth in the show's tenth season; while his pinch of celebrity makes it a curiosity that he found his way to Quiet Riot, it's not terribly surprising. He professed a harder and heavier background than most who find their way onto such shows, and if you've seen the videos of him singing Dio karaoke in a bar, you'll agree that there's promise in the lad - but not here. His voice has an extremely youthful and pure sound that sometimes clashes with Quiet Riot's aesthetic and sets him apart from Kevin DuBrow, who, whatever he may have used it for, possessed a strong and appropriately sleazy voice. More damningly, Durbin's performance lacks passion, but then, so do these undercooked rotters. I can't blame the guy for not being invested in modern classics like "Roll This Joint" and "Freak Flag."

Cliché-ridden, noncommittal, and about as sharp and dangerous as a bowl of lukewarm butter, Road Rage is just a puddle of mute guitars and whimpering choruses. Any pretender to the title of "Road Rage" ought to have a little more Mad Max spirit and less of The Bus That Couldn't Slow Down.